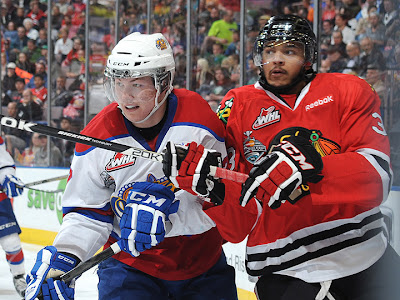 For the second consecutive night, Edmonton's Laurent Brossoit was out dueled by his counterpart at the other end of the rink, in what was an almost must-win situation for the defending WHL champs. Brossoit made nineteen saves, none bigger than a brilliant pad stop off Portland's Seth Jones on a two-on-one break early in the first, but in the end he fell one save short of what was needed from him.

Edmonton escaped having the game shoved down their throats from the drop of the puck for the first time in four games, as Derek Laxdal's crew matched the visitors stride for stride during the open twenty minutes. However, an ugly rebound off the pads of Brossoit coupled with some shotty defending from the Oil Kings, would once again put them behind the eight-ball.

Brendan Leipsic would bang home his second of the series, after Brossoit was unable to corral his initial shot on goal, with less than three minutes to go in the first. After finally putting together a fairly solid opening period of play, Edmonton were still left staring at a one goal deficit heading into the intermission.

After pushing the pace for much of the series, the Winterhawks fall back into a defensive shell over the final two periods. While much has been made of Portland's high-powered offence, it has been Travis Green's blueline that has been the difference in this series.

Carruth has had much of the credit heaped upon his shoulders for holding the Oil Kings at bay but it has been the work of Mr. Jones and company on the backend, that has made life for their netminder far easier to deal with. Edmonton have seen their shot totals grow as the series has moved along but the vast majority have been kept to the outside.

Despite registering just four shots in period two, Portland would increase their lead courtesy of their captain. With Dylan Wruck off for high-sticking, the Hawks wasted little in making the most of one of their view opportunities. After pulling apart the Oil Kings penalty kill in a matter of seconds, with three gorgeous tape-to-tape passes, Rutkowski had a wide open look from the slot and buried his chance.

Edmonton would finally solve Carruth 4:45 into the third, as Mitch Moroz batted home just his second of the post-season, briefly bringing the crowd to life and giving his team hope of pulling of the comeback. They did have a couple of quality looks to tie things up, the best of the bunch being a wide open cage staring Curtis Lazar in the face but Stephane Legault was unable to connect with #27.

Carruth did the rest, swallowing up everything that came his way. An undisciplined high-sticking penalty from Henrik Samuelsson with under a minute to play, put this one to bed. Portland would simply play keep away for remaining fifty-six seconds and leave Rexall Place with a pair of pivotal road wins in their pocket.

On a night in which the Oil Kings needed their best players to be their best players, outside of Lazar, none were able to raise their level of play. Leading scorer Micheal St. Croix and  TJ Foster were invisible for much of the night, outside of being robbed by Carruth on their one and only scoring chance in the third, while Samuelsson was a turnover machine for much of the evening.

Having played some major minutes for coach Laxdal since the loss of star defenceman Griffin Reinhart, the trio of Martin Gernat, Keegan Lowe and David Musil look to be playing on nothing more than fumes. All three continue to play hard and give it their all but against a team like Portland, that is rarely good enough.

The series shifts back to Portland on Friday night, where the Winterhawks will look to end the Oil Kings reign as Western Hockey League champs at one year. It will be tough sledding for Edmonton to go out and force a Game Six on Sunday afternoon back at Rexall Place but one thing that would certainly go a long way towards accomplishing that...would be a power play goal

After going scoreless on another four attempts on Wednesday night, the Oil Kings have nothing to show for their last twenty-nine opportunities on the man advantage.

"We've tried everything," said Laxdal. "We need to go back to the basics. I think the pressure's getting to them a bit. I'm hoping they can relax now. We're asking our players to shoot the puck and for some reason they won't. If you want to be successful on the power play, you have to shoot the puck. Plain and simple."

"For us to get back here on Sunday for Game 6, our power play has to work on Friday."