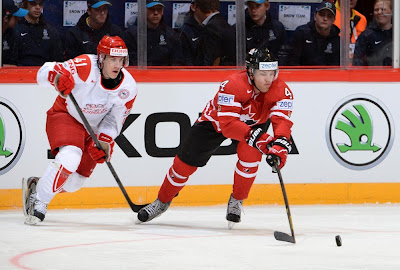 Despite having the vast majority of his players playing well below their capabilities during Team Canada's first two games of the tournament, head coach Lindy Ruff has decided to make an example of Edmonton Oilers star winger Taylor Hall at the 2013 IIHF World Championship. Why you ask? That's a very good question and one that only Ruff and his coaching staff could answer.


After seeing limited duty during the third period of Canada's 3-1 victory over Denmark in their opener, Hall saw just 8:33 of ice time in yesterday's 3-2 loss to Switzerland. Including all of 1:43 in the third period and not a single second in the extra session. No Team Canada skater played less.

Think about that for minute. Canada has generated next to no offence and has been downright dreadful on the man advantage and yet they leave a guy that scored fifty points and finished ninth in NHL scoring, on the bench. One would think Hall would be a handful on the bigger ice surface but apparently the trio of Ruff, Dave Tippett and Barry Trotz think differently. Seem odd to you? It certainly does to me.

Perhaps this coaching staff was unaware of the fact Hall was the second leading scorer in the Western Conference and trails only Steven Stamkos and Eric Staal as Team Canada's most prolific scorers during the 2013 campaign. Outside of that, stapling the talented youngster to the bench makes absolutely no sense and is frankly unwarranted.

While Hall has had some struggles during his first five periods wearing a Canadian jersey as a professional player, turning the puck over on several occasions, he has plenty of company among his teammates. However, others who are consistently coughing up the puck, are getting thrown back out there on a regular basis, see Claude Giroux, despite costing their team actual goals on the scoreboard.

Instead of granting the former first overall pick the necessary ice time to adjust to the bigger ice surface and different style of game, something given to the rest of the top players on this roster, Hall has been supplanted by the likes of Philadelphia's Matt Read and Wayne Simmonds. With all due respect to the hard working Flyers duo, that is laughable.

At what point will Team Canada coaches learn to get out of their own way and allow their talent to take over games on an international ice surface? Of course there needs to be accountability up and down the lineup but the mindset of using your grinders ahead of a guy as good as Hall, borders on insanity.

Very few players in the game today have the offensive package the Oilers youngster can bring to the table on a shift by shift basis and yet this coaching staff seems almost unwilling to let him go. Would it not make sense to allow him to find his game  and form a chemistry with linemates Matt Duchene and Jordan Eberle, against the likes of Denmark, Switzerland and Norway?

When it comes time for Canada to take on the likes of the Czech Republic, Finland, Russia, Slovakia, Sweden or Team USA, Ruff is going to need Taylor Hall to be at his very best. Using him in the manner he presently is, will make that next to impossible and puts the player in a very tough situation.

Come on Lindy, do what is best for your team and get of the way. These are not the Buffalo Sabres you are coaching. It is a roster filled with some of the best young talent in the game today. How about you give all of them the opportunity to show what they can do? You will be pleasantly surprised.
Posted by Oil Drop at 10:34:00 am