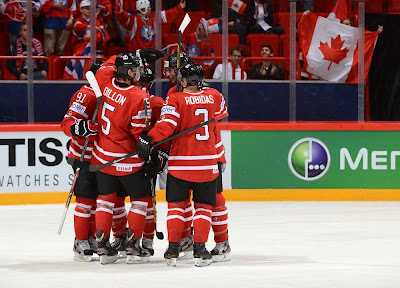 After a pair of less than impressive starts against Denmark and Switzerland, Canada finally found their mojo from the drop of the puck. Andrew Ladd opened the scoring at the 4:45 mark, courtesy of a brilliant pass from Stamkos, and just like that Canada started to look like the offensive juggernaut everyone was expecting to see.

Jeff Skinner would make it 2-0, wrapping home his first of the tourney and kicking off a Canadian flurry which would see them beat Norwegian netminder Lars Volden, three times in just under five minutes. Duchene would continue the onslaught, burying his third of the championship, thanks to a nifty little feed from Eberle, to make it 3-0.

Claude Giroux make it a four goal bulge before the period was out, tapping home a power play marker from the lip of the crease, courtesy of just a ridiculous pass from Oilers defenceman Justin Schultz. It was total domination by the Canadians. Plain and simple. It was such a dominating performance, that you almost forgot who Team Canada's starting netminder was.

Edmonton's Devan Dubnyk got the call for the second time in three games and faced all of one shot during the opening twenty minutes of play...and you could argue if he even saw that much rubber come his way. Dubnyk would lose his shutout bid midway through the second but did improve to a perfect 2-0 for the championship, stopping thirteen of the fourteen shots fired his way.

After being benched during the last half of Canada's 3-2 loss to Switzerland, Taylor Hall was once again given far less ice time, than any other Team Canada skater. However the talented youngster made the most of his limited opportunity, leading the team with six shots on goal and scoring twice in just over ten minutes of ice time. His first came early in the second, courtesy of yet another brilliant feed from Eberle, to make it 5-0 and than closed out the scoring in third, banging home a loose puck to make it a 7-1.

The win leaves Team Canada one point back of the Swiss for top spot in Group S and one up on Sweden, whom many felt would be Canada's stiffest competition during the preliminary round. Lindy Ruff's crew will get a first hand look at this year's edition of Team Sweden in their next time out, as the two face-off on Thursday evening/morning, in what should be one of the better games of the round robin portion of the schedule.
Posted by Oil Drop at 9:21:00 am