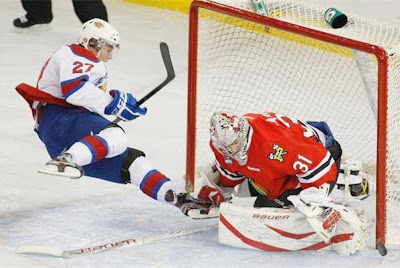 Portland's Ty Rattie scored what turned out to be the eventual game-winner early in the first and in the proces, became the WHL's all-time leading playoff goal scorer. The second round pick of the St. Louis Blues is enjoying one heck of a playoff run, scoring seventeen times in his eighteen post-season games

Through the first two games, Oil Kings netminder Laurent Brossoit had been the star attraction, holding an explosive Portland attack at bay for much of the opening six periods of the series. Unfortunately for him and his teammates, Brossoit struggled mightily upon his return to usually friendly confines of Rexall Place.

Taylor Leier opened the scoring at the 4:39 mark, sneaking a quick shot through the Oil Kings netminder, on what was somewhat of a broken play. It was not the start Edmonton wanted but it was exactly what the doctor ordered for the visiting Winterhawks.

From that point on, the Oil Kings were on their heels and Portland simply waited for the opportunity to pounce. That chance came at the eight minute mark, as Stephane Legault was out muscled for the puck at the Winterhawks bluelline, creating an odd man rush going the other way.

Nicolas Petan would feed Rattie on the two-on-one break and the Hawks sharpshooter made no mistake, beating Brossoit between the pads  to make it 2-0. It was a tough goal for the Oil Kings tender to surrender, as he appeared to be in perfect position to make the stop but was somehow fooled by Rattie's release.

It would only get worse form there, as Oliver Bjorkstrand completed the first period onslaught, sneaking in behind Edmonton's defence before flipping home a lovely little backhand up and over a helpless Brossoit. Just like that Portland had three goals on ten shots and played what was easily their worst opening twenty minutes of the series.

Michael St. Croix would get one of those back nine minutes into period two, finishing off a gorgeous three way passing play with linemates TJ Foster and Dylan Wruck, but that would be the lone time they would beat Carruth on the night. Just as he was during the Winterhawks game two victory, Carruth was solid when called upon during the opening forty minutes of play but took it to another level in period three.

Edmonton threw everything but the kitchen sink at the Portland starter over the final frame but he was up to challenge, stopping all twenty pucks fired his way. While the Oil Kings had few Grade "A" scoring chances, Carruth was incomplete control, as Edmonton were in all out desperation mode. The duo of Curtis Lazar and Henrik Samuelsson were buzzing for much of the night but were simply unable to solve the wall standing in front of the Winterhawks goal.

Head coach Derek Laxdal has to be at his wits end when it comes to his team's starts and suddenly ineffective power play. As previously mentioned, the Oil Kings have now had three consecutive dreadful starts to open the WHL Finals and that will have to stop, should they have intentions of defending their Western Hockey League Crown or pushing this series beyond five games.

As far as the man advantage goes, Edmonton are currently on an 0-25 run which dates back to their series against the Calgary Hitmen. It nearly cost them against their provincial rival but against a team as good as the Winterhawks, they need some sort of production out of the power play, or they will have little chance in advancing to 2013 Memorial Cup.

Game Four goes tonight at Rexall Place and the Oil Kings will most certainly be a desperate bunch. They clearly are in must-win territory but they do have experience to draw on, as they were in almost the same exact scenario during the 2012 Final. They actually had to win game four on the road in Portland, to even the series up at two games a piece.

However, there was one big difference. Edmonton knew they would have the potential of playing Game Seven in their home barn...something they do not have at their disposal this time around.
Posted by Oil Drop at 11:08:00 am