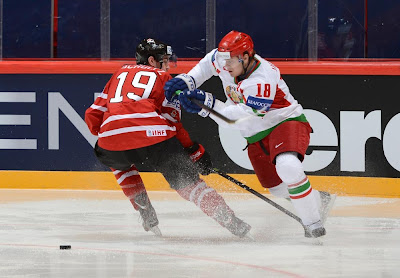 Canada needed a little bit of time to get going in this one, as Colorado's Ryan O'Reilly opened the scoring at the 11:17 mark, thanks to a brilliant behind the net feed from Jeff Skinner, to jump start the Canadians attack. From that point, it was a power play extravaganza for Lindy Ruff's crew.

Ladd would be the first to strike on the man advantage, ripping home his third of tourney, extending Canada's lead before the period was out. Twenty minutes in, Canada had a 2-0 lead on the scoreboard and a massive 20-2 advantage on the shot clock. From that point on, Canada put it into cruise control.

Having said that, Giroux still managed to give the fans their money's worth, going end to end, before setting up Stamkos an easy tap in for his fourth of the championship to make it  3-0. He than followed that up with gorgeous little fake/wraparound in the third period, leaving netminder Dmitri Milchakov out of sorts, and the Flyers captain nothing but a wide open net for his third point of the night.

After picking up a goal and an assist in the win over Belarus, Stamkos remains tied for the tournament scoring lead with nine points in five games. Outside of the former sixty goal man, the only other players to have registered nine points through the opening five rounds of games are Russia's Iyla Kovalchuk and Finland's Petri Kontiola.

The win moves Canada's record to 4-0-1 through the preliminary round of the competition and moves them temporarily into top spot in Group S, two points up on Switzerland, who still have a game in hand. With Team Canada set to take on the Czech Republic and Slovakia in their final two round robin games and the Swiss facing Denmark, Norway and Belarus, it looks as though first place may be out of reach for Lindy Ruff and company.

Hamhuis to Join Canada -  Vancouver Canucks defencman Dan Hamhuis has agreed to join Team Canada for the remainder of the 2013 IIHF World Championships. The blueliner is scheduled to arrive in Stockholm on Saturday and suit up for Canada's game on Sunday morning/evening.against the Czech Republic. Hamhuis did play in four straight world championships from 2006 to 2009, as a member of the Nashville Predators, including Canada's last gold medal winning side in 2007.
Posted by Oil Drop at 9:44:00 am