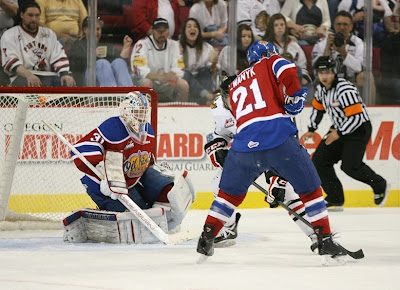 Michael St.Croix scored the OT winner 7:24 into the extra session, lifting the Oil Kings to a come from behind 3-2 victory and sending the series back to Edmonton for Game Six on Sunday afternoon. On night in which St. Croix played the role of hero, the star of show was Oil Kings netminder Laurent Brossoit.

The reigning WHL Playoff MVP took his game to another level, stopping forty-nine of the fifty-one shots fired his way, giving his team a chance to stay alive and fight for another day. After looking somewhat pedestrian like during games three and four of the series, Brossoit returned to his usual playoff form on Friday night.

From Portland's standpoint, they could not have dreamed for a better start. Joey Baker opened the scoring all of fifteen seconds in, splitting the Oil Kings D and beating Brossoit with a sneaky little backhand, sending the Rose Garden Arena faithful into early hysterics. In all honesty, the Hawks could have easily been up a pair within the first minute but Edmonton's #31 would have none of that.

For the fourth time in five games, the Winterhawks came out flying from the drop of the puck and jumped out to an early 9-0 advantage on the shot clock. Thanks to the effort of their starting netminder, the Oil Kings managed to weather the storm and would than draw even midway through of the period...on just their second shot on goal.

After cycling the puck deep in the Portland zone, TJ Foster threw a puck out front from behind Mac Carruth's net, that bounced in off Nicolas Petan and past the Winterhawks starter. The goal was originally given to St. Croix but replays clearly showed the puck deflecting in off Petan.

From that point on, it was end to end action with both teams trading chances over the next thirty minutes. Back and forth they went, as Carruth and Brossoit continued to stand on their heads. It was a frenetic pace from the outset and simply breathtaking to watch. In a day and age when all that seems to matter in the NHL is "systeming" the game to death, watching two highly talented teams playing fire-wagon hockey was definitely a sight for sore eyes.

Carruth would make the first big blunder of the night early in third, coughing up the puck after leaving his net to corral a St. Croix dump in. Carruth's ill-advised clearance attempt was picked off by Edmonton's Dylan Wruck, who found a streaking St. Croix, with nothing but a yawning cage to shot at.

That gave Edmonton their first lead of the night but Portland would respond with a lucky one of their own, with just under six minutes in regulation time. Brendan Leipsic continued his strong playoff run, as his bad angled shot deflected off  the stick of defenceman Ashton Sautner and glanced off a startled Brossoit and into the back of the net. Just like that, Portland had all the momentum on their side, with a possible Western Hockey League Championship staring them in the face.

Brossoit held the fort the rest of the way, getting his team into overtime, after Stephane Legault came closest to ending it in regulation, beating Carruth but catching nothing but iron, with a quick snap shot in the dying minutes. Portland held a 43-26 advantage on the shot clock through sixty minutes but Edmonton more than held their own over final twenty minutes of regulation.

Setting the stage for St. Croix's overtime heroics and keeping the Oil Kings chances of repeating as WHL Champs alive for at least a couple of more days. Despite Game Six being back at Rexall Place on Sunday afternoon, all the pressure remains on the shoulders of the Winterhawks.

After blowing a glorious opportunity to not only clinch the Western Hockey League crown but also secure a spot in the 2013 Memorial Cup, Portland will undoubtedly feel the collar tighten, should a Game Seven be necessary on Monday night. While they will have the advantage of playing a "winner take all" finale in arguably the loudest building in the WHL, it would be no guarantee against a lineup as experienced as Derek Laxdal's crew.
Posted by Oil Drop at 9:45:00 am