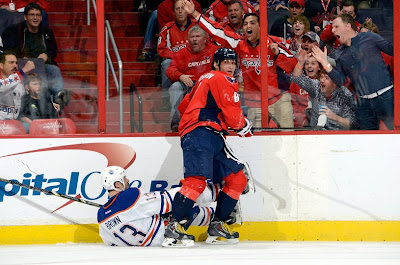 Jason LaBarbera continued the Oilers early season trend of having their netminder cough up at least one softie a night, as the veteran puckstopper stopped just 16 of 20 shots fired his way. Whereas the Capitals received a solid performance from their own struggling tender, as Braden Holtby turned aside twenty-eight pucks on the night.

Despite carrying the play for much of the night and jumping out to yet another early lead, Edmonton continues to find ways to lose hockey games. Centre Boyd Gordon put the visitors in front midway through the opening stanza, snapping home his team leading fourth of the year, after a lovely little play from defenceman Justin Schultz in the neutral zone sent the Oilers on their way.

Unfortunately, it would take all of four minutes for LaBarbera to give that one back to the Caps. An errand pass from Ryan Nugent-Hopkins bounced off the skate of Ales Hemsky and directly to a wide open Brooks Laich, who quickly turned and simply shoveled the puck on goal. It was a tough break for the Oilers but one that should have never found its way between the pads of Mr. LaBarbera.

After being outshot and badly out chanced over the opening twenty minutes of play, Washington were fortunate to find themselves in a 1-1 tie. Edmonton kept coming early in the second but Holtby helped turn the tide with an absolutely brilliant stop off David Perron and promptly handing his team the momentum changing stop that has been absent for both teams to start the season.

Joel Ward would rip his first of the campaign with the Caps on a four-on-three man advantage to make it 2-1. Ovechkin extended the lead three minutes later, as the sniper actually misfired on his attempt from slot but still watched his shot make its way past the Oilers starting netminder. Troy Brouwer would complete the trifecta, on yet another power play opportunity, as his fluttering shot managed to deflect off defenceman Jeff Petry leg, drop to the ice and slowly role across the goal line.

Will Acton would notch his first of the season and career late in the third period, tapping home a great feed from Petry into a yawning cage to make it 4-2 but this one was all but over after that four minute stretch in period two. With Edmonton on a three game losing skid, a 1-4-1 record on the season and a date with Sidney Crosby and the Pittsburgh Penguins next on the docket, things could get worse before they start to improve for the Western Conference cellar dwellers.

Oil Notes: For the second consecutive game, Eakins decided to scratch forward Nail Yakupov, despite the masses calling for the return of the talented Russian to the Oilers starting lineup. While the youngster has had his struggles to start the year, the back-to-back banishment to the press box does seems rather curious. Especially once you consider the fact Edmonton were taking on Ovechkin and the Caps. A curious move indeed.
Posted by Oil Drop at 10:27:00 am