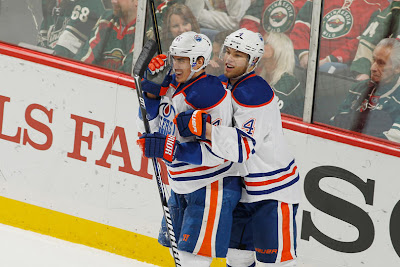 Having said all of that, with word coming down that Dallas Eakins has indeed decided to not dress him for tonight's tilt against Alex Ovechkin and the Washington Capitals, this coach and organization need to give their collective heads a solid shake. Sitting Yakupov out to send a message is one thing but to go out and embarrass the kid, not once but twice, is taking it a little too far.

There is no question the talented Russian had this four game stretch circled on his calender. Not only did he get a chance to face the Montreal Canadiens for the first time last Thursday night but also his old Sarina Sting linemate in Alex Galchenyuk.

That was to be followed by his first trip back to Ontario since being selected first overall by the Oilers at the 2012 NHL Entry Draft, to take on the Maple Leafs on Hockey Night in Canada. Sorry kid, not happening. Next on the dance card are the Caps and the "Great 8" and apparently Yakupov will be asked to miss out on the opportunity of facing the player most Russians look up to as the best of the best.

One can't begin to describe just how stupid this decision is.

Maybe if he is lucky, the Oilers #64 might find his way back into the lineup in time for Tuesday night's tilt against Evgeni Malkin and the Pittsburgh Penguins. Those are four pretty big games for any youngster to be involved in but four with special meaning to Yakupov and yet the organization seems the need to try and play hardball with the kid over absolutely nothing.

Why you ask? Good question but there really isn't any good explanation. Is he a work in progress and currently struggling with his game? Of course he is but sitting Yakupov in favour of a bunch of third/fourth liners is just downright silly and nothing more than a slap to a guy's ego.

Sorry but going down this road makes absolutely no sense and may ultimately blow up in their face. They will not gain anything from sitting Yakupov.  Players in general don't take kindly to being embarrassed by their organization and potential superstar players tend to have long memories.

While some have hinted at youngster possibly bolting for the KHL, there is absolutely zero chance of that occurring. He has made it abundantly clear on many an occasion, the only league he has any interest in is the NHL. That said, messing around with a kid's head that is as proud and engaged as Yakupov for sake of doing so, could comeback to haunt GM Craig MacTavish and company.

The Oilers have done a very nice job of allowing the likes of Jordan Eberle, Taylor Hall and Ryan Nugent-Hopkins to not only make their mistakes but give them the opportunity to work through those blunders and have become better players for it. It looks as though Yakupov may not get that same deal...making him far less likely to just sign the sort of lengthy extension.

Perhaps the organization doesn't see him on the same level as that trio, which is fair enough. However, should Nail Yakupov turn into the goal scoring machine many project, you can bet on him sticking it to the organization and so he should. The ball is clearly in the Oilers court and now it is up to them to decide where they want to go from here.

My suggestion to both Dallas Eakins and Craig MacTavish would be tread very carefully and quickly try to repair the unnecessary damage they have done to what appeared to be a solid relationship.
Posted by Oil Drop at 10:21:00 am