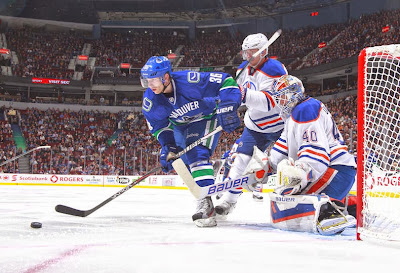 Dubnyk hasn't simply struggled to start the year, he has been downright awful. When you can point to a 4-1 loss to the Montreal Canadiens, in which he Dubnyk was average at best, as the highlight of his early season work...says everything you need to know. He just has not been good enough. Plain and simple.

Give the Oilers and rookie head coach Dallas Eakins credit for recognizing the twenty-seven year old's current struggles and giving him a couple of games off. Throwing him back into the fray after playing as bad as he did against the Maple Leafs would have been the worst possible thing for him. Especially when you consider Edmonton's next two opponents were the Washington Capitals and Pittsburgh Penguins.

One would think Eakins will go back to his number #1 guy on Thursday night against the New York Islanders and hope the big guy bounces back with a solid performance. There is no question the Oilers 1-5-1 start has put general manager Craig MacTavish in a bit of an uncomfortable situation and everyone already knows he isn't a "very patient guy".

MacT has undoubtedly been kicking tires around the league in hopes of finding a possible upgrade in goal but guess what, one isn't coming anytime soon. Unless the Oilers are going to go out and acquire a true superstar goalie, there is no reason to even entertain the thought of bringing in any of the available names out on the market...be it via free agency or trade.

As far as free agents go, there is absolutely no one currently available that anyone would seriously even consider to be on Dubnyk's level, with the exception of Ilya Bryzgalov.  While MacTavish did talk to Bryzgalov's agent Ritch Winter during the off-season, in my mind, I just can't see the Oilers GM going that route. Leaving a trade as the only real possibility for MacT to find his man.

Unfortunately, when you take a quick look around the league, it is painfully obvious that no top flight goaltenders are available. Could you get Ryan Miller out of Buffalo as a rental or possibly Craig Anderson from the Senators? Miller might be available, whereas Anderson is far less likely but with both staring at the possibility of becoming unrestricted free agents next summer, would the cost even be worth it? As tempting as making such a move might be, it could prove to be rather costly and ultimately not even get the Oilers where they are hoping to go.

Other names being tossed around over the last handful of days include the likes of Toronto's James Reimer, the Ducks duo of Viktor Fasth and Jonas Hiller, as well as St.Louis Blues backup Brian Elliott. With all due respect to all four men, are any of those guys an upgrade on the Oilers #40? Granted, tf we are talking about the Dubnyk who has shown up over the opening two weeks of the season, it wouldn't be much of a contest.

That said, the whole point of making such a move should be to upgrade the position for the foreseeable future and in my opinion, none of those guys are guaranteed locks to be better than Dubnyk. If the Oilers were going to make such a move, it had to be done prior to the start of the year...not ten games in.  While MacTavish tried to do just that during the summer, he couldn't find the right fit.

With that being the case, he reluctantly handed the former 2004 first round pick the keys to the car and to this point in the season, it looks as though it might be a decision that ultimately costs the Edmonton Oilers a chance at earning a playoff spot. Obviously it's still early and Dubnyk could rediscover his game but at the end of the day, the club really has no other option than to ride the wave and see where they land.

They may not be the answer fans want to hear but that doesn't change the reality of the situation. As I have said on numerous occasions leading up to the 2013-14 season, it is sink or swim time for Devan Dubnyk and like it or not, the chances of the Edmonton Oilers making the playoff will depend on exactly that.
Posted by Oil Drop at 10:14:00 am