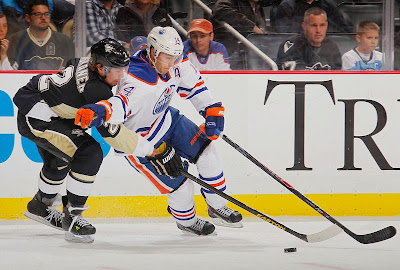 Evgeni Malkin's third period power play marker proved to be the difference, as Sidney Crosby continued to add to his league leading scoring total with another three point night. Jordan Eberle and Ales Hemsky scored second period markers against Pens starter Marc-Andre Fleury but the Oilers were unable to push another one past the former Stanley Cup winner over the final twenty minutes of action.

Fleury was at his acrobatic best in period number two, making thirteen of his twenty stops on the night, including a handful of highlight reel beauties. Edmonton decided to go with backup Jason LaBarbera for the second consecutive night and the veteran tender responded with what was easily the best performance of the young season from an Oilers netminder.

While the former Phoenix Coyotes backstop battled hard throughout, making twenty-five stops on the night, a first period gift to Pascal Dupuis and an ugly rebound leading directly to Chris Kunitz second period go-ahead marker, which was proceeded buy an absolutely ridiculous play from the Penguins #87, proved to be too much for the Oilers to overcome.

After playing musical chairs with his lines over the last handful of games, coach Eakins decided to run with set lines for much of the sixty minutes. The line of Mark Arcobello, Taylor Hall and Eberle were by far and away the best of the bunch, creating chances throughout the night and actually pushed Crosby's line on a regular basis.

However the unit of Ryan Nugent-Hopkins, David Perron and Nail Yakupov, who was making his return to the lineup after a two game stint in the press box, weren't quite so lucky. While they were far from terrible, the trio were unable do generate much at even strength and found themselves over matched on more than a few occasions against the aforementioned Crosby line.

That left the Oilers with a third line of Boyd Gordon, Hemsky and Ryan Smyth, as well as seldom used fourth line which consisted of Will Acton, Mike Brown and the recently recalled Ryan Jones. Much like the Nugent-Hopkins line, the unit of Smyth-Gordon-Hemsky created little 5 vs 5 but found ways to contribute in other ways.

Gordon's coming courtesy of another dominating performance in the face-off circle, whereas the veteran Czech winger got Edmonton on the board early in period two, mere seconds after an Oilers power play opportunity had expired. After being badly outshot in the first, 15-4, Edmonton returned the favour over the middles stanza, carrying the play and outshooting the Pittsburgh 15-9.

To be perfectly honest, the intermission couldn't have come at a better time for the Penguins, as the Oilers were starting to take over the game thanks in large part to the duo of Eberle and Hall. Whatever Dan Bylsma told his troops during the second intermission seemed to settle down his veteran side, as Pittsburgh looked to be back to their usual calm, cool and collected selves.

Give Edmonton credit, they stayed with the Pens throughout the final frame but an ill-timed high sticking minor by defenceman Andrew Ference, would prove to be rather costly. Less than thirty seconds after entering the penalty box, the Oilers captain was making his way back to the player bench, as Malkin wired home what turned out to be a "perfect pass" from Paul Martin, as the blueliner's stick exploded on his attempted point shot.

Unfortunately for the Oilers, both LaBarbera and defenceman Ladislav Smid reacted to Martin's potential blast, leaving the big Russian nothing but a ton of space and a yawning cage to rip the eventual game-winner in to. For a team that has nothing but a run of bad luck over the first couple of weeks of the season, one would think the hockey gods would eventually cut the Orange and Blue a break but Tuesday would not be that night.

The loss drops Edmonton to 1-5-1 on the season and extends their current losing streak to four straight. They have started their season high six game road trip off in almost the worst possible fashion imaginable, losing in OT to the Toronto Maple Leafs and dropping back-to-back regulation decisions to the Washington Capitals and Pittsburgh Penguins. This despite putting together three pretty solid efforts.

The Oilers will look to get back in the win column on Thursday night, as they pay a visit to John Tavares and the New York Islanders. They will then make their way back to Canada to close out the trip with a Saturday afternoon tilt against the Ottawa Senators and a Tuesday night affair against the Montreal Canadiens at the Bell Centre.
Posted by Oil Drop at 8:28:00 am