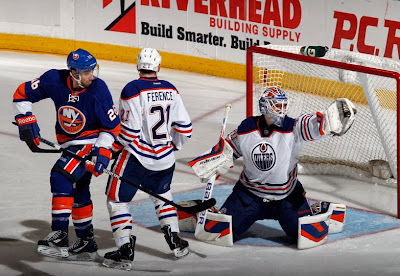 A late second period marker from John Tavares proved to be the difference, as the Islanders snapped their own three game skid with the win. After struggling through his previous four starts and taking a couple of games off, Dubnyk was solid in stopping thirty-seven shots in what was by far and away the twenty-seven year old's best start of the season.

That said, the Oilers starting netminder remains winless on the year with an 0-4-1 mark, as Dallas Eakins' side has now gone 0-3-1 in the first four stops of their current six game road swing. Eight games into their 2013-14 schedule and Edmonton has already managed to bury themselves into the basement of the Western Conference, allowing a league worst thirty-five goals against.

After watching Josh Bailey open the scoring at the midway point of period one, courtesy of a turnover from blueliner Anton Belov, Hall would put the Oilers in front within a matter of seconds. His first of the night and second of the year came at 15:52 mark, as he finished an absolutely gorgeous three way passing play from Justin Schultz and Mark Arcobello to get Edmonton back on level terms.

All of eight seconds later, the Oilers #4 would notch goal number two, knocking home an ugly rebound past Evgeni Nabokov, after the Islanders goaltender coughed up Arcobello's harmless looking point shot into the slot. The back-to-back strikes actually set a new club standard, breaking Wayne Gretzky's old mark of two goals in nine seconds, that the Great One set way back in 1981.

Unfortunately Edmonton's inability to hold a lead continued, as New York would tie it up early in period two. Kyle Okposo would bury his second on the campaign with Isles on the man advantage, thanks to a nifty little feed from Matt Moulson. In a blink of an eye, the lead was gone but the Oilers would be given multiple chances to regain their lead but ultimately came away empty handed from three consecutive opportunities on the power play.

Their inability to produce on the man advantage would comeback to haunt Eakins' crew, as Tavares would beat Dubnyk high to the glove side before the period was up, for his fourth goal in five games. The Isles captain continues to impress, as the Olympic hopeful is starting to heat up and has already put up nine points in seven games.

Outside of Hall hitting the post late in the third period, Edmonton generated next to nothing over the final twenty minutes. While it's kind of hard to refer to the eighth game of 82 game schedule as a near must-win situation, leaving Nassau Veterans Memorial Coliseum without at least a point in their pocket, is definitely a blow to the Oilers.
Posted by Oil Drop at 10:01:00 am