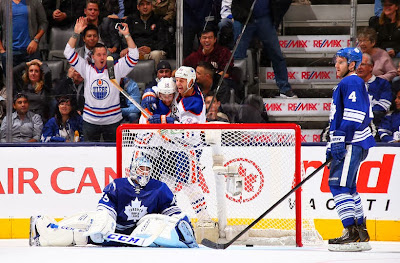 Despite a multiple point night from the quartet of Mark Arcobello, Jordan Eberle, Taylor Hall and Ryan Smyth, the Oilers managed to cough up leads on four separate occasions in falling 6-5 to the Toronto Maple Leafs in overtime. Dubnyk's horrific campaign took a turn for the worse, allowing six goals on just twenty-six shots and falling to 0-3-1 on the year with an eye-popping 5.43 GAA and .829 SV.

In the end, the Maple Leafs put this one to bed thanks to the rarely seen 3-on-1 break in overtime, courtesy of just an awful decision from defenceman Justin Schultz and what one could argue was a non-call against Cody Franson. The Leafs rearguard sent the Oilers Ryan Nugent-Hopkins to the ice just inside Toronto's bluline to create the break that ultimately delivered David Bolland's overtime winner.

It was a tough non-call for the visitors but to be frank, this one should never have even made its way into the extra session. If Dallas Eakins would have received even slightly below average netminding from his starting goalie, the former Toronto Marlies head coach would have left town with two points in his back pocket from his old stomping grounds. Instead the Oilers now head to Washington to face a struggling Capitals side with a 1-3-1 mark on the year and a near crisis situation approaching in goal.

For the fourth time in five starts, the Oilers managed to open the scoring but for the fourth consecutive time found themselves on the losing end. Smyth tipped home his second goal in as many games, just past the five minute mark, thanks to a lovely little feed from Arcobello and a collision between Eberle and Maple Leafs starter Jonathan Bernier. It was definitely a bad break for Bernier but one that did not warrant a minor penalty to the Oilers sharp-shooter.

As has been the case throughout the season, Dubnyk wasted little time in giving that one right back. Nazem Kadri would pot his second of the year from just a terrible angle, as the Oilers 6'6" netminder decided to make himself about 3" tall by inexcusably leaving his post and cheating on a pass that never came. Calling it an awful goal against simply doesn't do it justice.

Toronto would use that momentum-killer to their advantage, as James van Riemsdyk neatly tipped home his fourth on the year with a perfect deflection 15:26 into the opening frame. Edmonton would respond before the period was out, as Nugent-Hopkins buried his second on the year with the Oilers on a two-man advantage, on what was a head scratcher of a holding call against van Riemsdyk.

Even with Dubnyk's early blunder, Edmonton went into the intermission on level terms and proceeded to take their game to another level over the final forty. Boyd Gordon continued his impressive start to the season, knocking home his third goal in five games, as the Leafs seemed ill-prepared to start the middle stanza. The early break seemed to kick-start the Oilers, as they had the puck for what amounted to the entire period, outshooting the Leafs by the healthy margin of 17-4.

However, Toronto would even things up at three before the frame was done, as one of Edmonton's few breakdowns saw Joffrey Lupul left all alone in front and the former Oiler wasted little time in beating Dubnyk high to the glove side for his fourth of the season.

The Oilers would jump back in front 5:29 into period three, as Eberle converted a partial 2-on-1 break, snapping his first of the year off Bernier's glove and into the back of the Leafs net. Toronto would get that one back less than five minutes later, as van Riemsdyk notched his second on the night, on a wraparound that left Dubnyk dumbfounded.

Smyth would shovel home his second on the night at the 11:27. finishing off what was a gorgeous three way passing play between the veteran winger, Eberle and Arcobello. That made it 5-4 for the boys in Orange and Blue and with the Leafs having mustered all of eight shots since the opening twenty, this one looked to finally be in the bag...not so fast.

With Edmonton continuing to press and looking for that all important insurance marker, Bernier made what turned out to be a game saver of a stop off Arcobello, diving across the crease to take away  what appeared to be the kid's first career NHL goal at the 16:15 mark, with a brilliant glove save. It was the type of stop you need to get from your goaltender from time to time and one that Eakins and company have yet to receive at their end of the ice.

After holding Toronto shotless from the 15:31 mark of the third on, Lupul would slide home his second of the night, with thirty-one seconds left in regulation, on a shot that hit Dubnyk square in the pad but somehow still manged to trickle across the goal line. That said, the fact the Oilers #1 guy simply crumbled to the ice and back into his net as he attempted to make the stop didn't help matters in the least.

From that point on, the end result was a foregone conclusion. It was just a matter of how the Leafs would win it...be it in overtime or via the shootout. Five games into the season and Devan Dubnyk has out and out cost the Oilers two victories in the win column and three points in the standings. Something has to change or this season could spiral out of control in a hurry.

Oil Notes: Nail Yakupov was a healthy scratch for the first time in his National Hockey League career on Saturday night, as Eakins decided to give the struggling youngster a seat in the press box for a night. In four games this season, the former first overall pick has gone pointless while looking lost on more than a few occasions. Yakupov has definitely been fighting it but in his defence, being used in a third line role with a countless number of players, few of which who would be considered to be highly skilled, isn't exactly the best case scenario for the talented Russian.

Jesse Joensuu drew back into the lineup after missing the previous two plus games with a sore back. The former second round pick of the New York Islanders played 13:42 on the night but looked a step or two behind the play while accomplishing very little. Look for Yakupov to return to the lineup on Monday night against the Capitals and for goaltender Jason LaBarbera to make his second start of the year in place of Dubnyk.
Posted by Oil Drop at 9:47:00 am