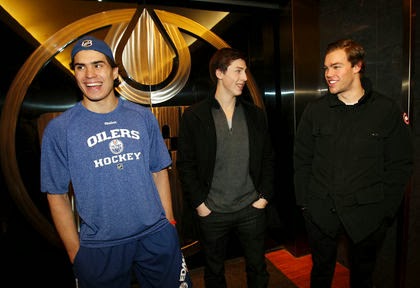 Two games prior to the Olympic break, Edmonton Oilers head coach Dallas Eakins decided to make a switch to his top line. Instead of continuing to truck along with his regular #1 unit of Jordan Eberle, Taylor Hall and Ryan Nugent-Hopkins, the rookie bench boss decided to replace Eberle with none other than Nail Yakupov.
While the newly formed trio have played just six plus periods together, they looked real good against both the New York Rangers and New Jersey Devils and actually helped propel Yakupov to what were easily his two finest performances of the season.  After looking about as bad as one could possibly look for much of his sophomore campaign, the young Russian sniper seemingly found his mojo overnight.

Perhaps it was nothing more than being given the opportunity to play alongside the likes of Hall and the Nuge or maybe it was something else. Regardless of why or how, the fact remains the guy wearing #64 on his back looked like a completely different player against the Rangers and Devils.
The unwillingness to use his teammates and countless number of individual efforts were suddenly nowhere to be found. Instead we have seen the twenty year old winger make a concerted effort to not only try and share the puck but also move to open space after dishing it off…which is something the kid has struggled mightily with since coming to the NHL.
There were no sheltered minutes playing with the likes of Sam Gagner or lack of opportunity after being buried on the fourth line. This time around Yakupov has been handed seventeen plus minutes a night with the Oilers two best and to his credit, he has made the most of the opportunity. There was still the occasional misstep in his end of the rink but nowhere near the egregious errors we have almost come to expect from the former 2012 #1 pick.
That jump or spark, if you will, which was evident for much of his rookie season, looks to back. After watching the Eberle-RNH-Hall combo struggle over the last handful of games and look downright awful against the Buffalo Sabres, Eakins had to have been thrilled with what he saw from his newly formed top line in New York and New Jersey.
Not surprisingly, it looks as though the coaches have decided to keep the three together for the foreseeable future and with the Oilers current situation being what it is, who could blame them.  One would think this organization would be jumping all over themselves to see what sort of chemistry their three former first overall selections could develop over the final six weeks of the season.
With twenty-two games left in what has truly been a wasted campaign, priority one needs to be on who fits where come 2014-15. We all know where Taylor Hall and Ryan Nugent-Hopkins sit when it comes to the future of this club but that is not so clear when it comes to Nail Yakupov. Let us hope Dallas Eakins and company use the last quarter of the schedule to answer that very question and not pull out the ol’ blender after four or five games.
Posted by Oil Drop at 9:02:00 am