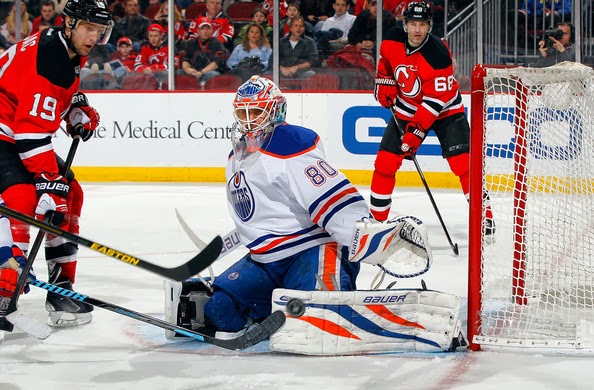 Earlier today I posted my first in a series of columns on Edmonton Oilers players who could possibly be on the move leading up to or at the NHL Trade Deadline over at HometownHockey.ca and focused on potential suitors for one Ales Hemsky.

While the talented Czech will certainly be the biggest chip general manager Craig MacTavish has to play, don’t be surprised to see the Oilers ship off one of their goaltenders prior to Wednesday’s cut-off.

The chances of that guy being Ben Scrivens is pretty much zero.  The only way that were to occur, is if the Spruce Grove native were to tell MacT he had no intention of signing with the Oilers in 2014-15. Considering the twenty-seven year old has a ton to prove and been handed an opportunity to show what he could do over the final half of the current campaign, he would have to be nuts to engage in such a conversation with his GM.

Should Scrivens continue to play well, he will either secure himself a job in Edmonton or another NHL city and might just be as a starting goalie. Oddly enough, that is the exact situation his Oilers goaltending partner Ilya Bryzgalov currently finds himself in. The big difference being, the likelihood of the veteran tender being shipped out of town prior to next Wednesday’s deadline appears to be far greater.

While his overall numbers don’t look great, outside of a tough four game stretch to start the current calendar year, Bryzgalov has been solid since signing as a free agent back in early November.  In fact, since Scrivens has arrived in town the duo have combined to carry the club to what has easily been their finest stretch of games this season.

With that being the case, the smart money would appear to be on MacTavish trying to find the former Vezina Trophy nominee a new home prior to next Thursday. While the organization may have some interest in signing the Russian netminder in a possible 1A/1B scenario for 2014-15, it would be mild at best. Add to that the fact Dallas Eakins hinted at giving Scrivens a shot at running with the starters gig following the Olympic break and the writing seems to be on the wall.

Come playoff time, teams that are looking for goaltending help generally tend to want to add a veteran guy. That said, there not a bunch of teams looking to acquire an insurance policy in between the pipes. However, there are two Western Conference teams that could fit the bill as possible suitors for Ilya Bryzgalov.

Los Angeles Kings – Back on January 4th, Jonathan Quick returned from a 24 game stint on the IR with a groin injury and since then, back up Martin Jones had started exactly one time prior to last night’s appearance against the Colorado Avalanche.  That should come as no surprise, as Quick is the man in LA but considering he is coming off back surgery in late 2012 and the aforementioned stay on this sideline this season, you would have to believe Dean Lombardi would be interested in adding a vet for the upcoming post season.

With all due respect to Jones, who teamed up with Scrivens to hold the Kings in the race while their #1 guy was on the shelf, I’m pretty sure both Lombardi and Darryl Sutter would be far more comfortable with a Bryzgalov type sitting at the end of their bench come playoff time. From everything we’ve heard, Bryz has been great in the Oilers room and wouldn’t cost the Kings a whole hell of a lot.

Minnesota Wild – With Josh Harding likely done for the season and Niklas Backstrom having a tough time staying healthy, it looks as though the Wild could be forced to try and make the playoffs with Darcy Kuemper In between the pipes. While the rookie goalie has looked good during his brief stint as “the guy” in Minnesota, not sure that would be the best course of action if the Wild actually intend on trying to qualify for the 2014 playoffs.

Bryzgalov has proven to be a very effective netminder playing behind a defensive minded team, just take a look at his numbers during his time with the Phoenix Coyotes.  If Backstrom were to get healthy and prove he is ready to go, they would have the advantage of two veteran goalies to carry the load down the stretch, which they will likely need to have any hope of grabbing one of those final playoff spots out West.
Posted by Oil Drop at 4:41:00 pm