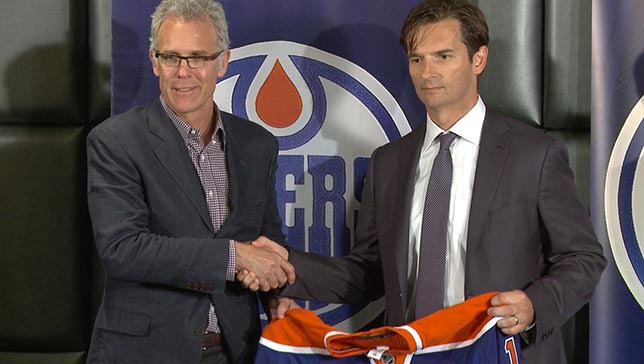 Heading into Tuesday evening’s Edmonton Oilers Meet and Greet with players and Hot Stove event with Dallas Eakins, Patrick LaForge and Craig MacTavish, I honestly wasn’t sure what to expect. While tons of fans enjoyed the opportunity to meet their hockey heroes, grab a quick snap shot and take advantage of a free meal on the club, it was the Q and A portion of the night that interested yours truly.


We got what was expected out of Mr. LaForge, telling us how great the new arena was going to be and that the future looks very bright. We heard the GM talk about how they will bring back a championship team to Edmonton and while this isn’t the season anyone expected, it is all part of the process. MacT said he will continue to look to improve the team through whatever means necessary.

He hinted at being busy during the upcoming NHL Trade Deadline and also suggested the need to bring in players who are tougher to play against. He specifically brought up the names of Andrew Ference, Mark Fraser, Boyd Gordon and Matt Hendricks and while I believe the vast majority of fans agree this team needs to get bigger, the thought of this club going out and acquiring more guys like Fraser or Hendricks scares the hell out of me.

At the time of the Devan Dubnyk trade, I had no issue with MacTavish bringing Hendricks on board, even with his contract being what it is. That said, the idea of adding a similar player to what is already a paper thin bottom six, makes zero sense.   In my mind, they need to find functional size to play on their top two lines, not a bunch of bangers and crashes that are limited hockey players.

Very much like LaForge, the Oilers general manager delivered nothing we haven’t all heard before. That brings us to the head coach. Eakins was his usual confident self. Some people are not fans of how he carries himself, whereas I have no issue with it whatsoever. Having a head coach that is confident in his own abilities and those of his players is fine with me.

To his credit, he openly admitted to having struggles within the locker room when he first arrived, which was obvious to those who paid attention to how he distributed his ice-time early in the season. Eakins had no problem taking blame for where his team currently sits in the standings and also had no issue standing up for his guys.

He went out of his way to single out the play of Ryan Nugent-Hopkins and Justin Schultz for coming along as far as they have since October 1st and was dead on with his assessment. Both guys have taken huge steps forward in their own end of the rink and continue to improve on a nightly basis.  However, there were a couple of things this guy has grown tired of hearing.

When Eakins was listing off areas in which his team has improved as the season has progressed, he went back to his usual mantra…fitness levels. With all due respect to Dallas, as a collective unit, the fitness level of his players was never an issue. These guys are already fit. The problem is they are not good enough as a collective unit. They may not be equipped to complete the insane 11 hour bike race he does in the summer but that doesn’t mean they’re not fit.

Also, between Eakins and MacTavish I bet we heard the word “process” at least 20-25 times last night. We get it, re-builds take time but at what point do they stop using it as a crutch? It’s always about the process…when do the fans get a timeline as to when this ship might actually start pointing north? We are now nearing the four year anniversary of the Oilers selecting Taylor Hall with the first overall pick in 2010.

Four years is a large chunk of time and can’t simply be dismissed…especially when the team is sitting in the basement of the Western Conference standings.