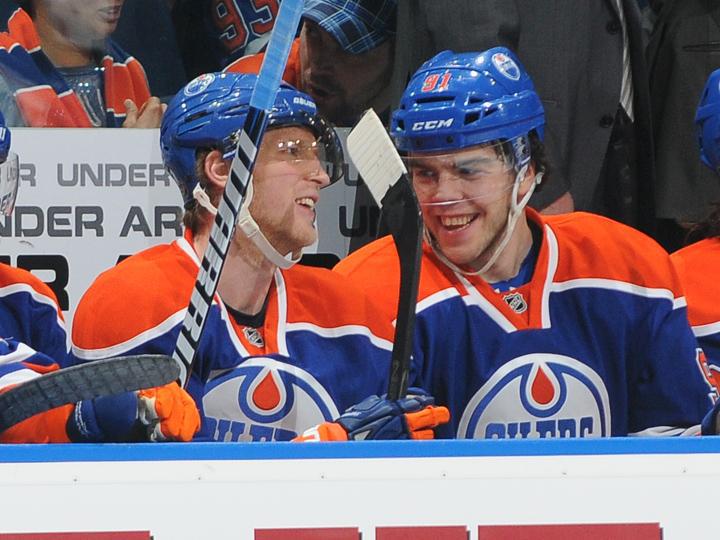 As we get closer to the March 5th NHL Trade Deadline, rumours surrounding the 29th place Edmonton Oilers will continue to grow.  With roughly 85% of the league either firmly planted in a playoff spot or in the midst of fighting for one, you can bet many of those teams will be targeting players off the rosters of the Buffalo Sabres, Calgary Flames, Florida Panthers, New York Islanders and Edmonton Oilers.

With Edmonton currently sitting with nine pending unrestricted free agents, one can’t help but think general manager Craig MacTavish will be a busy man over the next week or so.

Outside of Ales Hemsky, he may not have the quality of player to offer that some others do but that won’t keep teams from calling on the potential cost of say Anton Belov, Ilya Bryzgalov, Mark Fraser, Ryan Jones, Corey Potter, Nick Schultz, Ben Scrivens and Ryan Smyth.

Today we turn our focus on potential suitors for the Oilers #83. After hearing his name in trade rumours for the last number of years, it looks as though this will be the deadline that the talented Czech winger finally makes his departure from Oil Country.

The chances of MacT getting true value for a player like Hemsky are almost nil but should the club decide to eat some of the $5 million remaining on his contract, it might be better than most expect. Be it a draft pick or two, a prospect or a bottom six forward that currently resides on an NHL roster, fans should be no means be expecting MacTavish to pull a rabbit out of the hat here.

It is hard to imagine there not being a number of clubs who would seriously consider adding the thirty year old to their roster for the remainder of the year and potential playoff run but as always, it will come down to the cost of acquiring the asset and cap space. Below I have listed seven teams, though I am sure there will be many more, that could take a crack at acquiring the veteran winger.


Detroit Red Wings - With Henrik Zetterberg on the shelf for the rest of the regular season, Pavel Datsyuk and Johan Franzen both battling injury many seem to think Hemsky could be targeted by Ken Holland as a short term fix in the Motor City. With Detroit currently sitting in a tie for seventh spot in the Eastern Conference standings, adding a player Hemsky’s ilk would appear to make perfect sense.

Funny thing is, if we were talking about a healthy Red Wings roster, I would have considered them to be at the very top of the list of teams interested in acquiring Hemsky. As it stands, they will likely still have interest but are no longer a guarantee. If Detroit were still in the West, we wouldn’t even be having this conversion. They would have simply allowed the chips to fall where they may and go from there.

Between all the injuries and the departure of Nicklas Lidstrom, the Wings GM has the perfect scenario to simply write this year off to bad luck and look forward to 2014-15. That said, that isn’t how winning organization’s think and with the East being as wide open as it is, if Detroit were to sneak into the playoffs, they could make life tough for many an opponent.


Los Angeles Kings - While speculation of a potential Oilers and Kings deal has revolved around centre Sam Gagner, the chances of the two sides pulling off such a trade prior to the deadline are, at least in my mind, almost non-existent. However, the chances of Dean Lombardi inquiring on the potential cost for Hemsky are quite real.

The Kings GM has shown interest in the veteran winger in previous years and could be exactly would the doctor ordered for LA’s struggling offence. Dropping a player with Hemmer’s ability into that lineup, could rejuvenate the former thirteenth overall pick overnight.

The fact the Kings struggle as much as they do to score goals is rather perplexing, though Darryl Sutter’s defence first system obviously plays into it. Unlike Gagner, Hemsky is more than capable of playing in Sutter’s system and would likely be overjoyed with the opportunity to lineup beside some big /talented players that should help him from being targeted on a regular basis.

Los Angeles has a plethora of what the Oilers are looking for, aka size, and the two sides have orchestrated more than a few deals over the last number of years. In my opinion, there is far better chance of Hemsky ending up in LA than Detroit.


Montreal Canadiens - This one seems to be a stretch at best but the Habs have always been rumoured to have liked the player and would be open to bringing him on board. He would unquestionably make them a better team upfront, as Montreal has a real need for a guy with Hemsky’s tools. Problem being, they don’t have a ton of cap space. They would love to move Rene Bourque but with two years left on his deal at $3.3 million, that isn’t happening anytime soon.


Ottawa Senators - Of all the teams that could possibly make a pitch for Hemsky leading up to the Trade Deadline, the Ottawa Senators are likely the one who need him the most. His addition would not only fill a massive void inside the Sens top six but likely be the perfect tonic for a guy like Jason Spezza.

Unlike Montreal, the Senators have the space to make such a move happen, I just don’t believe Eugene Melnyk has any interest in spending the extra money that would be necessary to make such a move come to fruition. If he is, look for Ottawa to take a serious run at bringing him on board.


Phoenix Coyotes - See Ottawa Senators. He would be a nice fit in Phoenix and probably look real good line with a couple of fellow Czechs, in Martin Hanzal and Radim Vrbata. While the Coyotes have scored more than usual this season, they are not exactly deep upfront and would benefit greatly from adding more skill into their top six.

That said, my guess would be ownership likely doesn’t have the appetite to take on extra salary over the last six weeks of the season. Though standing pat may very well cost them a spot in the post-season and a handful of very profitable playoff gates. Something could possibly develop between these two.


Pittsburgh Penguins and San Jose Sharks - For those of us that consider ourselves fans of Ales Hemsky, which I have always been among, it is one of these two teams we hope the Oilers #83 eventually ends up going to. Both are built in such a manner in which a potential lengthy playoff run would surprise no one but those chances would improve even further, should they be able to add a healthy/motivated Hemsky into the mix.

The player hockey fans watched during the 2014 Sochi Olympics is the one fans across Oil Country fell in love with many years ago. Unfortunately, the combination of injuries, lack of opportunity and a whole lot of losing has kept us from seeing him on a far more regular basis. Many felt that player was no longer there but the Olympics told us a different story.

If a team like the Penguins or Sharks can make such a move, they would be out of their minds to not jump at the opportunity. He would cost a contending team a fraction of what they would have to pay for the likes of a Matt Moulson or Thomas Vanek and likely be better off for it.


Hopefully that is something Craig MacTavish can use to his advantage in getting as much as possible in return but let’s not kid ourselves here. Regardless of what he manages to pry loose from whatever team Ales Hemsky ultimately goes to, he is going to lose this trade.