The man who calls it as he sees it 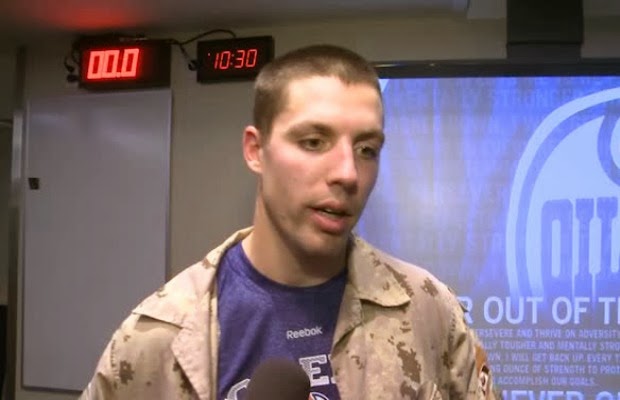 Prior to being shipped off to the Calgary Flames in early November, defenceman Ladislav Smid could always be counted on for telling it like it was in the media. While many of his now former teammates would try to make excuses or simply refer to some “bad breaks” or “bad luck” when it came to the teams play, the former blueliner would usually come clean.

If Smid felt the team wasn’t good enough, he was not one to shy away from calling out either himself or his teammates. More often than not, his comments were right on the money and rather refreshing to hear come from an actual player’s mouth following a crappy performance. While his departure unquestionably left a void within the dressing room, his role as being the guy who would speak his mind in the media has been inherited by none other than David Perron.

After missing out on qualifying for the Stanley Cup Playoffs during his rookie campaign in 2007-08, the former St. Louis Blues winger has grown accustomed to playing hockey in the post-season. Unfortunately for him and the Oilers, that will not be the case in 2013-14, which doesn’t appear to sit well with the former 2007 first round pick.

Over the last few months, Perron has been the one guy who never seems to make excuses following an Oilers game…regardless of the result. While the likes of Jordan Eberle, Sam Gagner and Taylor Hall have had their moments when it comes to holding the team accountable within the media, they tend to generally refer back to those aforementioned bad breaks.

That hasn’t been the case with Perron and Thursday’s loss to the Minnesota Wild was a perfect example. While head coach Dallas Eakins and many of his players used the Olympic break as an excuse for what was an absolutely dreadful performance, the native of Sherbrooke, Quebec would have none of it.

When asked about his team’s effort against the Wild, his response pretty much says it all. “It was pretty embarrassing. Nothing was going. We didn’t generate any offence and our defence wasn’t good…awful game”. When the questioning shifted over to the Oilers power play, Perron didn’t hold back.

“Well, we just don’t bear down. There are couple of pucks bouncing and we just try to use our sticks to keep it in, instead of using our bodies. Going back for breakouts, skating 200 feet one way and 200 feet back…once you do that once or twice, you don’t have enough energy left to battle down low and next thing you know, the puck is going back down the ice. The second unit comes on and it’s the same deal all over again.”

Win or lose, Perron doesn’t try to sugar coat things and if you go back and listen to most of his interviews this season, you will usually hear him use phrases like “it’s not good enough” or “we have to be smarter than that” or “we’re not assertive enough” and my personal favourite “enough talking about bounces, we have to make our own bounces”.

Whereas most of his teammates come across as almost dismissive with their play as a collective unit, the twenty-five year old sounds genuinely pissed with half-assed performances. Perhaps it has something to do with coming from an environment in St. Louis which had already started to turn the corner into a positive direction, following some trying times for a number of years.

Then again, it could just be the makeup of the individual and at the moment, the Edmonton Oilers could sure use a couple of more Davis Perron type players…both on and off the ice.
Posted by Oil Drop at 9:57:00 am