The final days of #83 in Oilers silks 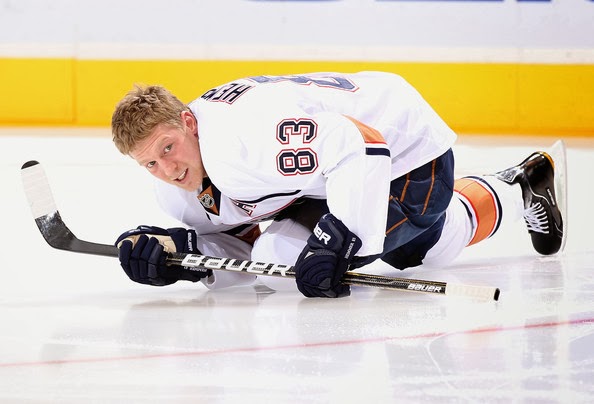 Listening to the Edmonton Oilers Ales Hemsky discuss his immediate future in what was a brief scrum with local media following Friday afternoon’s practice, was arguably one of the true low points of the 2013-14 season. The writing may have been on the wall for some time but hearing the former 2001 thirteenth overall pick pretty much refer to his days in Oilers silks in the past tense, could not have been easy for fans of the talented winger to stomach.


After hearing his name in countless rumours for the last number of years, Hemsky always knew it was more a matter of when and not if he would be leaving town prior to March 5th. As much as it may pain Oilers fans to hear, it sounds as though #83 is pretty pumped about leaving the only NHL home he has ever known and getting the opportunity to once again play some meaningful hockey games and quite frankly…who the hell could really blame him?

Missing the playoffs for seven consecutive years can’t be easy for any player but for guy as gifted as Ales, the chance at ending that run of futility has clearly sparked the thirty old vet’s game. He was by far and away the Czech Republic’s best player during the 2014 Sochi Olympics. The combination of not only playing with other skilled linemates but also doing so on one of the biggest stages the game of hockey has to offer, has clearly left the long-time Oiler yearning for another shot at post-season play.


In recent days, some have suggested that Craig MacTavish would be wise to consider re-signing Hemsky to a contract extension prior to Wednesday’s NHL Trade Deadline.  While in a perfect world that would be great, listening to him speak during that four minute clip confirms there is absolutely zero chance of that happening.

While many of us may not want to accept the reality of the situation, that doesn’t change the fact it is staring each and every one of us in the face. The Edmonton Oilers have no interest in keeping Ales Hemsky around and Ales Hemsky likely has even less interest in remaining a member of the Edmonton Oilers. There is no grey are here…the time to part ways has arrived.

By the sounds of it, MacT might be looking at getting as little as a third round pick in return for a guy who has easily been this organization’s best player over the last eleven years and one that likely still has more than a few good seasons of hockey left in him. Trying to swing a deal from a position of weakness is never a good idea but unfortunately, that is the situation the Oilers rookie GM finds himself in.

With that being the case, Craig MacTavish may ultimately have just one option at his disposal.  If he is unable to secure anything close to half decent value for Ales Hemsky, in my mind, the organization owes it to the player to send him somewhere in which he could potentially be a part of taking a run at hoisting the Stanley Cup in just over three months’ time.
Posted by Oil Drop at 10:49:00 am