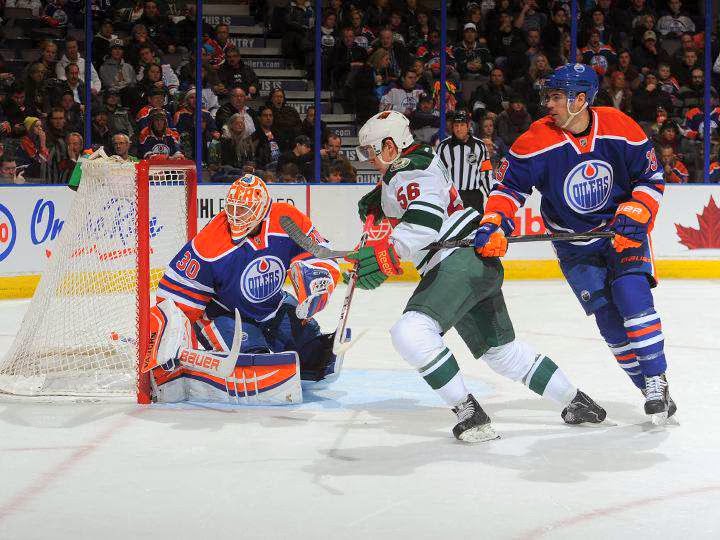 There is nothing quite like watching the Edmonton Oilers lose to the Minnesota Wild. Of all the teams in the National Hockey League, there is likely none I despise watching more than the Wild…especially when they are on the road. As if watching Dallas Eakins’ crew dish out yet another disappointing performance on home ice wasn’t already enough, last night’s 3-0 loss was almost impossible to sit through.
With nearly three weeks off in between games, expecting these two teams to deliver anything but a disaster of a game would have been nothing more than a pipe dream. While realignment may have put the Oilers in a tougher division, the fact I had to wait until game 61 on the schedule to watch these teams face-off at Rexall Place makes it almost worth it.

If both sides combined to create anything close to ten scoring chances over what was easily sixty of the dullest minutes of hockey I have witnessed in some time, someone please tell me when they occurred? Edmonton generated absolutely zero from start to finish in being shutout for the eighth time this season, while Minnesota managed to get three pucks in behind Ben Scrivens in what was by far and away the easiest outing of his brief tenure in Oilers silks.
Scrivens may have looked pretty damn sharp in his new gear, especially his circa 1979 Eddie Mio like mask, but he was arguably as poor on this night as he was in his debut back on January 16th against ,you guessed it, these same Minnesota Wild. Unfortunately, that has become far too familiar tune when it comes to Oiler players and their former Northwest Division rival.
The top line of Taylor Hall, Ryan Nugent-Hopkins and Nail Yakupov did next to nothing after heading into the Olympic break on high note with strong performances against the New York Rangers and New Jersey Devils. RNH played a starring role in what turned out to be the eventual game-winner, as he lost his man in his own end and then had a front row seat for Mikael Granlund’s ninth of the season, just 2:04 into period one.
To make matters worse, Yakupov was forced to leave the game in the third period after taking a Justin Schultz point blast off his right ankle and was seen leaving the arena in a walking boot. In today’s NHL, seeing a player leave his dressing room in a walking boot doesn’t quite mean what it once did but it certainly isn’t a good sign. One would guess we will have an update on the young Russian sniper’s condition prior to the Oilers hosting the Calgary Flames on Saturday night.
Make no mistake, last night was ugly but let’s hope it was nothing more than a combination of Olympic break rust and a visit from the Minnesota Wild. If those are not the two reasons behind the performance we witnessed last night, these could turn out to be the longest six weeks in the history of the Edmonton Oilers.
With that said, Oilers fans are all but guaranteed at least one more stinker between now and the end of the 2013-14 campaign, as we are less than two weeks away from the return engagement on March 11th at the Xcel Energy Center in St. Paul, Minnesota. On that night, expecting anything but the absolute worst from this hockey club would be expecting far too much.
Posted by Oil Drop at 9:06:00 am