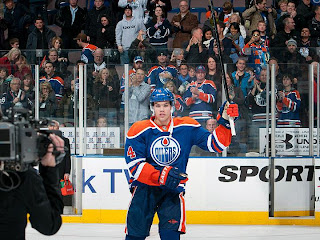 It's funny how things sometime work out. When you combine the injuries the Edmonton Oilers have suffered of late with their poor play and the fact that their opponents on Saturday night are currently the best team in the Western Conference, all things were pointing towards a very long night for the Rexall Place faithful. That's the great thing about sports, you just don't know what is going to happen. Instead, many in attendance were throwing their caps out on the sheet of ice before it was all over.

For the third time this season, the young Oilers put on a stellar performance on Hockey Night In Canada and for the third time, it was the kids who led the way. Ryan Nugent-Hopkins picked up five assists and Taylor Hall scored three times, as Edmonton destroyed the visiting Blackhawks by the score of 9-2.

Ales Hemsky opened the scoring on a beautiful individual effort before the game was a minute old and the Oilers never looked back. While they were helped early on by some shaky goaltending from Ray Emery, the home side were full marks for the victory. Some would say that Chicago had this one coming, after annihilating Edmonton on Rexall Place ice during the 2008-2009 season by the same score.

Patrick Sharp did tie  it up at one briefly, at the three minute mark with his seventh of the season on the power play but the Oilers put up four more before the period was out. On top of Hall's hat trick performance and Hemsky's opener, Edmonton got goals from Ryan Jones, Ryan Smyth, Jordan Eberle, Tom Gilbert and captain Shawn Horcoff. Gilbert was a force all night in all areas of the ice and wound up with four points. The pairing of Theo Peckham and Jeff Petry, who were terrible on Thursday night against Ottawa, rebounded nicely. They both were +5 on the night and Petry picked up three assists to boot.