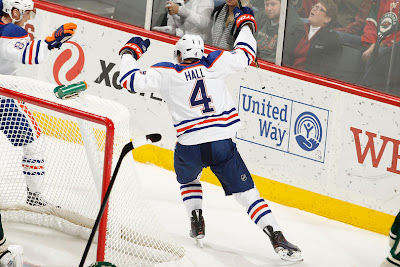 It had been nearly four full years since the Edmonton Oilers had defeated the Minnesota Wild at the Xcel Energy Center. That string of futility mercifully came to an end Friday afternoon, as Edmonton picked up a 5-2 victory, ending the teams seventeen game losing streak in St.Paul. The Oilers continued to ride the hot play of the clubs top two lines, as they combined to score all five of the visitors goals. Goaltender Nikolai Khabibulin was very solid, stopping 30 shots to help Edmonton move within three points of the Northwest leading Wild.

Just as they did against Nashville on Tuesday night, the Oilers came out buzzing from the drop of the puck and set the tone early.. While the top two lines did not score on their first shifts of the game, they both managed to pin the Wild in their own end and did everything but get on the score sheet. The message was sent, Edmonton wanted this game and they wanted it bad. At the 5:15 mark, they were rewarded with the games first goal.

Ryan Smyth took a pass from Jordan Eberle, in front of the Minnesota goal, and banged in his team leading twelfth of the campaign, past netminder Josh Harding. The Wild manged to keep the score 1-0, despite tough guy Brad Staubitz attempt to allow the visitors to increase their lead, by taking two minors on the same play and giving Edmonton a four minute power play. Minnesota killed them off without allowing a shot on goal but eight and half minutes later, Staubitz did the same thing and this time, the Oilers made them pay.

Rookie Ryan Nugent-Hopkins picked up his first of two on the night, when he cruised in from the slot and poked in a loose puck to give Edmonton a two goal advantage. Before the period was out, forward Devin Setoguchi  knocked in his own rebound, past Khabibulin to pull the Wild  within one. Setoguchi's initial shot appeared to have been hit out of  mid-air with a high stick but the call was not made and the goal stood.

Minnesota evened the score at the nine minute mark, when Oiler killer, Pierre-Marc Bouchard, picked the pocket of a surprised Ryan Nugent-Hopkins at centre ice, turned the play back up ice and managed to beat Khabibulin, with a nice move for the equalizer. The game would remain tied, until Taylor Hall broke the deadlock with just under four minutes to go, in the middle stanza. Hall was simply, in the right place at the right time. Tom Gilbert's point shot ricocheted towards the talented winger and he calmly deposited the puck into the yawning cage. Edmonton was twenty minutes away from ending their losing ways in Minnesota. To their credit, they came out and left it all on the table in the third.

Both teams had scoring chances in the final twenty but it was the Oilers who managed to restore their two goal lead. Shawn Horcoff snapped his seventh of the season, from just inside the slot, after a brilliant play from Ales Hemsky left Wild defencman Justin Falk swimming on the ice. Hemsky picked up Taylor Hall's pass behind the Minnesota goal and pulled his trademark button hook, which sent poor Falk for a tumble and Hemmer plenty of room to make a pretty pass to the Oiler captain, who made no mistake. The teams exchanged chances the rest of the way but score didn't change, until Nugent-Hopkins collected his second of the night, tenth of the season, into an empty net.

Edmonton are off to Colorado, where they will finish their four game road trip against the Avalanche. The Oilers have won two of three on their current trip and are now winners of three of their past four games. That being said, the Avs will be a tough test on Saturday night. Playing in Colorado on the back end of back-to-back games is always tough on opposing clubs but it becomes an even greater challenge, when you consider the Avalanche haven't played since Wednesday night and have won just two of their last eleven games. They will be hungry and come out hard against what I am sure will be a tired Edmonton club.