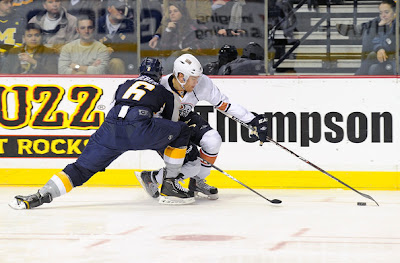 Hall - Gagner - Hemsky
Jones - Horcoff - ?
? - Belanger - ?
Coach Tom Renney stated the entire team will be taking the pre-game skate tonight and he will then make his decision as to who will be in the starting lineup. I would guess the three spots above with ? would be the spots but who knows. He may use this as an opportunity to send a mention to one of the regulars that haven't been playing up to par.
Defence Pairings


The Oilers recalled Alex Plante this morning and returned Taylor Chorney to Oklahoma City. The obviously feel the need Plante's size in the lineup, which they do, but they also need Peckham and Petry to not be god awful for a change.

Devan Dubnyk will get the call in between the pipes with Khabibulin starting last night in Nashville. Devan hasn't had a solid start in sometime so tonight's game will be big for him. With the Oilers playing two sets of back-to-back games this week, Dubnyk will get his chance to work himself back into the goaltending rotation. We shall see if he takes advantage of the opportunity.
Posted by Oil Drop at 11:38:00 am