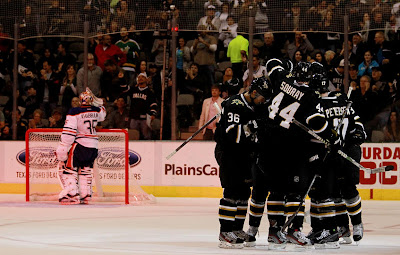 The Edmonton Oilers continued their losing ways on the road, this time dropping a 4-1 decision to the Dallas Stars. The Stars were the aggressor from the get-go and were full marks for the victory. Dallas imposed their will on the young Oilers and punished them physically. Defenceman Mark Fistric, who led the club with seven of their forty-seven hits, was a wrecking ball, crushing one Edmonton player after another. Goaltender Nikolai Khabibulin kept the Oilers in this one stopping 30 of the 33 shots fired his way but the offence went cold after last weekends outburst against the Chicago Blackhawks.

Dallas came out hard from the drop of the puck and had the Oilers pinned in their end for the first ten minutes of the opening stanza. They were rewarded with the games opening marker from former Oiler Toby Peterson. Edmonton started to find their legs as the period moved along and had a glorious scoring chance late in the period but Ales Hemsky rung one off the bar, after a pretty setup from Sam Gagner. The Oilers ended the period with only seven shots on Kari Lehtonen and the big netminder was more then up to the task. The second period was a reversal of sorts.

It was the Oilers who came out strong and were buzzing the Stars goal but unable to sneak one by the Stars netminder. The best chance coming on Ryan Smyth's failed wrap around attempt that went past a yawning Dallas net. As tends to usually happen, the Stars carried the puck down the ice, after the missed opportunity, and made it 2-0 on Steve Ott's third of the campaign. From that point on, the Stars took the period over but were unable to solve Khabibulin, who made several point blank stops on the night. With the Stars still carrying the play, the Oilers got a ray of hope when rookie Ryan Nugent-Hopkins potted his eighth of season, with a slick finish in tight. Suddenly, Edmonton was back in it was just under twenty-five minutes to go. Unfortunately, their hopes were dashed quickly, as the Stars made it 3-1 under a minute later. Michael Ryder scored on a three-on-one break after defenceman Theo Peckham decided to try and throw a big open ice hit at the Stars blueline...and it cost the visitors dearly.

Edmonton could only muster up four shots on goal in the third, despite having three power plays in the period. The Stars simply shut the game down and continued pounding Oilers players all over the ice. Edmonton's overall record dropped to 10-8-2 on the season but they continue to struggle on the road, as they now set with a 3-6-1 mark away from Rexall Place.