The Kid Needs To Slow Things Down 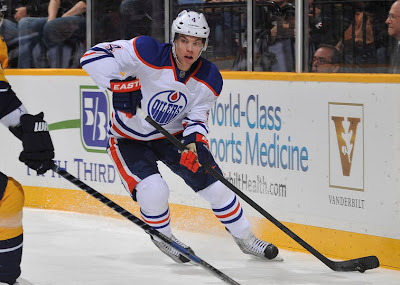 With the start Ryan Nugent-Hopkins had had to his NHL career, Taylor Hall has almost become a bit of a secondary story in Edmonton this season. Nugent-Hopkins currently leads the team in scoring with 22 points while linemate Jordan Eberle is not far behind at 21. The two youngsters showed instant chemistry right off the bat so when the time came to breakup the Oilers "new" kid line, it wasn't surprising that Hall was the one moved. The 2010 first overall selection, currently sits with six goals and 16 points on the season but he has yet to find his "A" game.

Some people around the city are already starting with "the Oilers should have taken Tyler Seguin" talk...if you can believe that. With the young Bruin off to a hot start and Hall having trouble adjusting to the extra attention being paid to him by the opposition, some are starting to jump to conclusions. Both of these kids are going to have great NHL careers but they are entirely different players and the Oilers, in my mind, took the right player, case closed.

Which brings us back to the present and Hall's early season struggles. During training camp everyone commented on the fact that the kid seemed even quicker then last season and was that much stronger. All good signs pointing towards the talented winger having a breakout campaign.Yet we are now at the quarter pole of the season and many are asking the question, What is wrong with Taylor Hall? The answer is very simple...nothing at all.

Hall is the type of player that every organization dreams of one day acquiring. There are many star players in this league, that want nothing to do with the pressure of being "The Guy". In Hall, Edmonton has a player that not only wants to be "The Guy" but he won't settle for anything less from himself. He has that inner drive to push himself to become be a great player and it is a special trait that few players have. It makes it even more impressive, when he consider he turned 20 years old a week and a half ago. It's that drive to be the best, that is making the adjustment to how the other 29 teams defend him, a difficult one.

Taylor has been able to do, for the most part, whatever he wanted on the ice for sometime but it's not so easy at the NHL level. Opposing players are obviously bigger, stronger and smarter and the coaching is far superior and much more detailed. So it shouldn't come as a big shock that Hall has struggled. His game has always been a in your face style, where he almost dares you to stop him. With the speed at which the kid moves many can't handle him straight up but teams have already started adjusting their style of play against him and now it's his turn to respond.

Many compare Hall to former Oiler legend Mark Messier but in all honesty, he is more of a cross between Messier and former linemate Glenn Anderson. He plays with the same sort of vigor in his game that Messier displayed but at a whole different speed. At times, it seems as though Taylor is almost to fast for his own good and it puts him in bad situations. Like Anderson, the kid is fearless and is willing to try almost anything out on the ice. Sure he could just blow by guys in the OHL but in the NHL, defencemen have adjusted and learned to take out the talented youngster. In essence, he has made life easier on teams because they know he'll be coming at them at one speed. He needs to make one simple adjustment to his game and that's to slow down.

Hall has to start showing the opposition different looks, at a different pace. If he is able to do this while using his teammates more effectively, the kid will become almost unstoppable. Trying to beat every player one on one along the boards, will do nothing but get him killed and I am sure he is aware of it but it will take some time to change. Remember, Hall never played with high-end skilled players in Windsor so playing with the likes of  RNH, Eberle and Ales Hemsky is something new to him. He went from having to be the take charge guy on the ice, at all times, to now having the option of using his teammates much more often. It is no doubt an adjustment for the young man to make but one I am confident he will make...and in very short order.
Posted by Oil Drop at 9:29:00 am