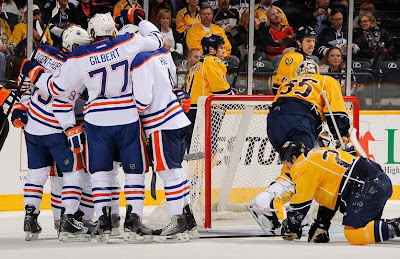 Take note NHL, the kids are starting to find their way on the road. After a tough outing in Dallas the previous night, the Edmonton Oilers rebounded with their best road game of the season, pounding the Nashville Predators 6-2. Jordan Eberle lead the onslaught with two goals and an assist, while Taylor Hall and Ryan Nugent-Hopkins had two helpers a piece. Not to be outdone, veterans Shawn Horcoff, Ryan Smyth and Ales Hemsky all had two point nights, as Edmonton's top two lines were too much for the Predators to handle.
The Oilers came out hard in the first and were carrying the play from the get-go. They were rewarded at 9:31 mark, when Horcoff banged in his fourth power play marker of the season, while being tackled to the ice in the blue paint. The lead became two, when Ales Hemsky broke in all alone, on a feed from Smyth, and made it look almost too simple, beating Preds star netmeinder Pekka Rinne, with a perfectly placed shot. Eberle stretched the lead to 3-0, with his first of the night. Taylor Hall carried the puck into the Nashville zone and was levelled by Jordan Tootoo, from behind, but Hall still managed to get the puck over to his linemate, who fired a wrister past Rinne. After one, the Oilers led by three goals, had a 13-3 advantage on the shot clock and managed to chase one of the best goalies in the league from the Nashville net.

The Preds came out hungry to start the second and forced the Oilers into taking three penalties in the first thirteen minutes, which included a two man advantage for just under a minute. Nashville peppered netminder Devan Dubnyk with eighteen shots during the middle stanza but were unable to beat the Edmonton puck stopper. Dubnyk needed to have a good outing, after being less then stellar in his last four appearances and the big man did not disappoint. While neither side were able to find the back of the net in the second period, that all changed in the third.

Jordan Eberle opened the scoring in the third, with his second of the night, to put this one to bed. Nashville did manage to break Dubnyk's goose egg with a pair of goals in the final ten minutes but the Oilers managed two more themselves. Defenceman Jeff Petry notched his first of the season during an Edmonton power play and Horcoff ripped a bullet past the Preds back-up Anders Lindback, for his second of night on a great feed from Sam Gagner.

Edmonton is now off to Minnesota, to play the Wild in a Friday afternoon affair and then finish their four game road trip with a stop in Colorado. The Saturday night game will be the fifth time this season that the Oilers have played on Hockey Night In Canada. Three of the previous four games have turned into the Ryan Nugent-Hopkins show...so what are the chances the kid makes it four out of five?