The Risk In Moving Ales Hemsky 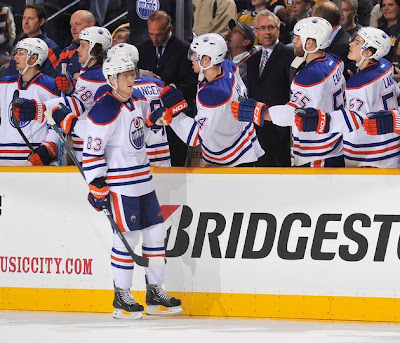 When Oiler fans see Ales Hemsky playing at his full capabilities, he is still arguably the best offensive weapon this team has. As good as youngsters Ryan Nugent-Hopkins, Jordan Eberle and Taylor Hall have been since joining the Oilers, Hemsky still remains the player that teams fear the most. The talented Czech can take his level of play up a notch or two and when he does, he is a joy to watch and nearly impossible to stop. The problem being, he's become somewhat injury prone in recent years and at times, appears to give the impression he is disinterested. So what should General Manger Steve Tambellini do with the soon to be, unrestricted free agent?

Since Hemsky returned from his latest stint on the sideline, he has looked average to poor most nights. In his defence, he played all of four periods of hockey before his shoulder started to act up but in those four periods, he was one of Edmonton's best players. The winger has collected six points in the eight games he's played since returning but the game against Nashville, was the first time he looked like the Ales Hemsky of old. In fact, much of the teams early success has come without that big of a contribution from # 83. With Hemmer possibly starting to find his game, it makes things very interesting for Tambellini.

In a perfect world, this organization would love nothing more then to sign Hemsky to a two year deal, at a reasonable number and have a guarantee he would remain relatively healthy. Unfortunately, we don't live in a perfect world and hence decision time is fast approaching. If Hemsky were to sign, you would think, he would want a longer term, unless Edmonton were to overpay on the yearly number. Would the nine year veteran turn down a yearly salary of $6 - $6.5 million for two years? Would the organization even consider such an offer? They won't get a player via trade or free agency that is better then Hemsky, at that term, but they could acquire a player who has a far better track record when it comes to staying healthy and at a much lesser number. It's a tough call for both sides.

Edmonton can't commit long term because they will have to look at signing not only the kids but also Ryan Whitney, within the next three years. They also have the issue of already having Shawn Horcoff on the books at $5.5 million...until the end of the 2014 - 2015 season. From Hemsky's standpoint, he would undoubtedly get a nice UFA offer from someone but would it be a good fit? He has suffered threw a lot of pain during his nine years as an Oiler and he rarely had the luxury of playing with high skilled players. So now that they have finally added those pieces to the puzzle, he is going to get up and leave? In all likelihood, he would be going into a situation that is far less appealing, then the one he currently sits in.

As for Tambellini, if he feels the player will not be a good fit moving forward or simply unlikely to sign, he will need to decide when is the right time to look at moving the asset. If Hemsky's play keeps improving, he will be a huge part of this teams success in the immediate future. That being said, the Oilers General Manager has to weigh two different options:
The longer the Edmonton Oilers delay their decision on what to do with Ales Hemsky, the better off this team will be in the short term, of that there is no doubt. On the other hand, by possibly taking too long to make the move, the organization may lose one of its best assets for next to nothing. It's a very risky game that Steve Tambellini is playing and one that will have a major effect on this organization moving forward.
Posted by Oil Drop at 6:33:00 am