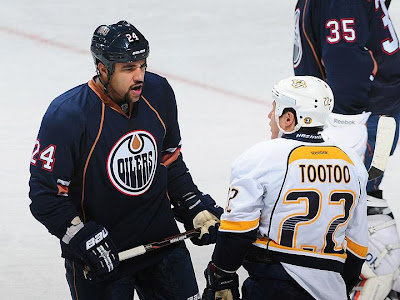 Over the last few years, the Nashville Predators have more often then not, had their way with the Edmonton Oilers. That being said, the Oilers have already managed to pick up two victories against the hard working Predators and were looking to make it three for three on Monday night. Unfortunately for the home side, the visitors had no intention of allowing the streak to reach three in a row. Making only his second start of the season, goaltender Anders Lindback was able to do what all world netminder, Pekka Rinne, could not...beat the Edmonton Oilers. Led by a hard hitting performance from forward Jordan Tootoo and a clutch goal from linemate Nick Spaling, the Nashville Predators found a way to edge a weary looking Edmonton Oilers club by a score of 2-1.

On Jordan Eberle "Mini-Stick Giveaway Night", the Oilers were able to muster up next to nothing upfront. They managed all of eighteen shots on goal, with the aforementioned Eberle, being the only one able to solve the Preds other goaltending tower. The club was playing their first game without injured forward Taylor Hall and his absence from the lineup, was clearly felt.

Goaltender Nikolai Khabibulin, did all he could to give the Oilers an opportunity to steal two points from the Preds, making a number of highlight reel saves throughout the night. Unfortunately for Khabibulin, the one puck that slipped past him in an all out Nashville onslaught, during the second period, was one he would love to have back. After making numerous acrobatic saves, the veteran netminder had a harmless looking shot from defenceman Shea Weber, somehow elude him, to even the score at one. The Predators gained momentum, after finally solving the Russian netminder and simply took the proceedings over. For the remainder of the period, it was all Nashville but they could not get that go ahead marker, thanks to the Edmonton netminder.

Edmonton continued to generate little during the final stanza and ultimately paid for it. After Sam Gagner coughed up the puck to the right of the Oilers net, the Predators jumped on the opportunity and quickly found away to get Spaling the puck, who rifled a shot, from the slot, off the crossbar and past Khabibulin at the 12:21 mark of the final stanza. The Oilers still had more then enough time to tie things up but were simply not up to the task. While they gained possession in the final minute of play, Lindback was never pressed into making a quality save to secure the victory.