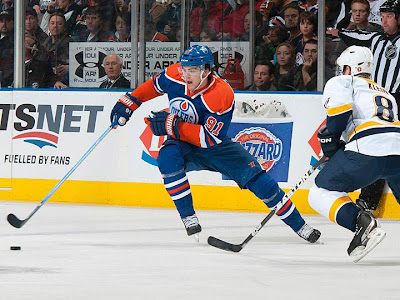 Apparently whenever the Predators come to town, it's giveaway night at Rexall Place. Back on October 17th, it was "Ryan Smyth Bobble Head Night" and Smyth didn't disappoint, scoring the game winner in a 3-1 Edmonton victory. I'm sure both the club and Jordan Eberle, would love for the youngster to pull off the same feat, on "Jordan Eberle: Mini-Stick Night".

With Hall out of the lineup, you would have to think that Magnus Paajarvi will get the first crack at playing with Ales Hemsky and Shawn Horcoff. It's the simplest move to make and it would not disrupt the other three lines at all. Sam Gagner would also have to be considered for the role but he doesn't play left wing and the Jones - Belanger - Gagner line, are coming off their best performance to date. Look for Magnus to come out flying and don't be surprised to see him break through with his first goal of the year.

As I am typing this, there has still been no word on if Alex Plante will be sent back down to Oklahoma City but I would suspect he will remain in Edmonton until Andy Sutton is ready to return. Only way I see Plante getting into the game against the Preds, is if Jeff Petry is still feeling under the weather.

Ryan Whitney played just under twenty minutes in his second game back, which was almost four minutes more then he played in his first game against the Minnesota Wild. As Whitney becomes more and more comfortable, you will see Theo Peckham's minutes start to decline. Peckham has been playing anywhere from 15-20 minutes most nights and he should realistically be playing 10-14 minutes.

As of right now, there is no doubt who should be starting on a nightly basis for the Edmonton Oilers. The veteran has been the better of the two goaltenders and the margin is starting to widen. Devan Dubnyk needed another strong start against the Avs, to solidify his spot in a goalie rotation with Khabibulin. Unfortunately for Dubnyk, he picked the wrong time to play his worst game of the season.