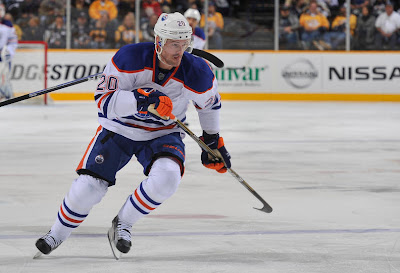 You may find it odd that you are about to read a piece on the Oilers power play and that Eric Belanger is pictured above it. The fact that Belanger and Oilers power play, are even mentioned in the same breath is very troubling to me. Unfortunately, this coaching staff believes that the struggling centre needs to be part of the mix, when Edmonton is up a man. With Taylor Hall out of action for the foreseeable future, the success of the power play will become that much more import, in determining how the Oilers will do without the former first overall selection in their lineup.

With Ryan Whitney returning to the lineup against Minnesota, Edmonton had decided to go with the following power play alignments:
Once Whitney was added back into the equation, most felt Belanger would be taken off the second unit but instead, they decided to remove defenceman Jeff Petry. A curious choice, when you consider that Belanger does not possess the heavy shot that one would expect from a guy that mans the point and the fact that the play regularly dies on his stick, when he has out on the man advantage. To this point, they have been able to get away with this set up because the number one unit has been on fire. With the injury to Hall on Saturday night, that top unit is going to have to get another look and if Saturday's shuffle is any indication of what we will see, the Oilers could be in some trouble.

Instead of making the easy move, bumping up one of Hemsky or Smyth, the coaches decided to insert Ryan Jones onto the first power play. Apparently, the plan is to now go with two lines that have players that are out of their element. No offense to Jones, who has been good in almost any role he has been asked to play for this club, he is not a power play guy.

Until # 4 returns from the sidelines, Edmonton should use a couple of different looking, but possibly effective, groups on the man advantage.

In all honesty, I would rather they go with the second option but I can't see them moving Shawn Horcoff from the top unit. While the Oilers captain has been good on the man advantage and they like having him out with RNH to take the draws, Smyth is the better choice. The Oilers leading scorer, has been one of the best power play guys in the league since the1996-97 season. That year, Smyth managed to score 20 goals on the power play and he has been at it, ever since. Sure they could leave Hemsky on the second unit and put both Smyth and Horcoff on the top unit but in my opinion, it would be redundant. The reason Horcoff has been successful on the power play this year is simple, he goes to the front of the net. When Horc is used as a trigger man he isn't very effective but if he's doing what Smytty does, he has proven he can hold his own.

Having a second unit that revolves around Smyth, will allow both Sam Gagner and Magnus Paajarvi the opportunity to keep things simple, as they continue to try and find their games. With Sam coming off his best game of the season against the Avalanche, this might be just what he needs to get going. As for Paajarvi, he hasn't been good this season and has been in and out of the lineup of late. This is the chance he's been waiting for, to show what he can do in a top six role. The talented Swede should get first crack at replacing Hall on the Horcoff line 5-on-5 so it would make sense for him to see regular duty with the man advantage. While Paajarvi won't be able to replace what Hall brings to the table, he has all the tools to fill in for him on a temporary basis. If he proves he can contribute on a nightly basis, he will continue to see time with better players, even when Hall returns.

The absence of Taylor Hall leaves a gaping hole in the Oilers lineup, that they can not easily plug. That being said, good teams find a way to get the job done when they lose their star player, see the Pittsburgh Penguins as exhibit A. Edmonton has to find a way to stay in the race while the star player is down. The best way to accomplish that, is to continue being productive on the power play. Scoring at even strength will now become much more difficult and being able to chip in with a goal or two on the man advantage, could very well be the difference between winning and losing. The players are being used in their proper roles. Simply put, if this staff keeps both Eric Belanger and Ryan Jones off the power play, I will be a happy man.
Posted by Oil Drop at 1:47:00 am