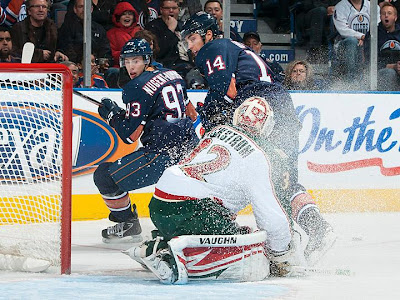 With the club recalling centre Ryan O'Marra and a lingering back injury that is keeping Ben Eager out of practice, all signs are pointing towards O'Marra making his season debut against the Wild. It's a given that Minnesota will be looking to dominate the Oilers from a physical aspect and with Darcy Hordichuk being the only big body available, inserting O'Marra makes perfect sense.

The Magnus Paajarvi experiment lasted only one game, as it looks as though Sam Gagner will got the nod to see how he does playing alongside Shawn Horcoff and Ales Hemsky. Not totally against giving Sam a shot but I am concerned with him playing his off wing. That being said, playing Gagner with better players is the only way his production will increase. He has been better of late but the numbers don't show it.

look for Andy Sutton to return to the Oilers lineup after passing the Renney fitness test at yesterday's practice. Much like O'Marra, the style of game Sutton plays will be a welcomed addition to the Oilers backend nut there is one difference. With Sutton coming back in, one of Colten Tuebert or Theo Peckham will be coming out. Edmonton won't gain much from a physical stand point but they will be adding a ton of experience.

As uneven as Peckham's play has been this season, all signs are pointing towards Teubert being the odd man out.

No surprise here, as Khabibulin has been far more consistent then Devan Dubnyk and is coming off a great performance on Monday night against the Preds. With Edmonton playing back-to-back games this weekend, look for Dubnyk to get another start against the Columbus on Friday and he needs to have a solid outing.