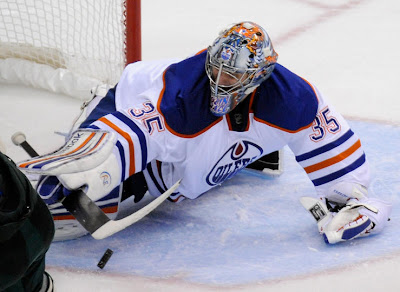 With the month of November now in the books, it's time to look back at the month that was and dish out my monthly report card. Each players rating will be based on their performance from opening night up to and including the teams last game on November 30th. Yesterday the spotlight was on the forwards and coaching staff.. Today, the focus is on the defence and goaltenders.

Devan Dubnyk - While Nikolai Khabibulin was the better of the two goalies during the month of October, Dubnyk's play wasn't far off. Fast forward thirty days and things are no longer close. Devan's stats during November were 1-3-0 with a 3.68 GAA and a .865 SV% in five appearances. Those are 2010-2011 Khabibulin like stats and Dubnyk looks like he has lost confidence in his game. If he wants too see more time in between the pipes, he is going to have to relocate his game. Needs To Work On: His positional play has been poor in nearly every outing this month and his rebound control has been terrible. Dubnyk is at his best, when he is square to the shooter and lets the puck hit him. At the moment, he is all over the place and pucks are continually sneak past him. If he can have a couple of solid appearances in a row, I think Devan will again gain confidence in his play. He wasn't mentally tough enough during his rookie season and it showed. His on ice demeanor after letting in a goal, has reverted back to the Devan Dubnyk of 2009-2010 and that Dubnyk wasn't very good.
Grade: B-

Nikolai Khabibulin - The veteran's play has come back down to earth after a ridiculous run to start the season. His November totals were 4-5-1 with a 2.46 GAA and a .913 SV% and are much more in line with what one would expect. That being said, he had two poor games, stats wise, against Ottawa and Chicago, that make the numbers look worse then they really were. Khabby continues giving the team a chance to win on a nightly basis, which is all you can ask from your goalie. He still sits top five in the league in both GAA and SV% and in mind, has been the Oilers MVP to this point in the season. Needs To Work On: Khabibulin has started to let in the odd weak goal but he seems to do it in between brilliant sequences of saves. I have little doubt that he is starting to tire, after playing so much in a short period of time but with Dubnyk's poor performance, the coaching staff has little choice but to over use the Russian netminder. Khabibulin has never been great in the shootout but he currently sits with an 0-3 record in the skills competition. Tough to say if it's trend because all three have been against the Wild and in the first two, he allowed a total of three goals
Grade: A+

Cam Barker - With Barker playing only two games before injuring his ankle, nothing has changed in his rating. He is scheduled to be sidelined until February. Needs To Work On: Getting his ankle 100% healthy and look to make an impression on the Oilers and the rest of the league, in hopes of securing a contract next season.
Grade: C

Taylor Chorney - Chorney was reclaimed by the Oilers from the St.Louis Blues and managed to get into two games, after Edmonton's D was hit hard by the injury bug. Those two games were the same as every other game Chorney has played in an Oilers uniform. He was just there. Taylor was a depth D man when the Blues picked up and he was still one when Edmonton re-claimed him.
Grade: N/A


Tom Gilbert - Gilbert continues to eat major minutes on the Oilers blueline and is doing it in fine fashion. He plays in all situations and has now reached the point, where he looks comfortable playing his twenty plus minutes a night. An area of weakness in his game has always been his lack of physical play but that is no longer the case. While no one would confuse him with Jason Smith, Gilbert has stepped up and has actually thrown a couple of open ice hits. Needs To Work On: Continue to keep his game simple and play within his skill set. When Gilbert rushes things, he tends to get into trouble. At his current level of play, Gilbert is in the running for the team MVP.
Grade: A+

Theo Peckham - Arguably the teams toughest blueliner, Peckahm continues to struggle with his decision making. While he has cut back on his mistakes, he still takes penalties at the worst possible times. Theo has done his best work, on the penalty kill. Maybe it's because he simplifies his game in shorthanded situation but he is much more effective in that role. Needs To Work On: Keep from trying to make the big open ice hit, at the opposing  teams blueline. Peckham does not seem capable of picking his spots so he should stop it all together. His tendency to pinch has cost this team numerous scoring chances, many of which, have resulted in goals against.
Grade: C-


Jeff Petry - The youngster has started to take a major step in his overall game of late and not surprisingly, it has coincided with the return of Whitney to the lineup. Needs To Work On: To take the "bull by the horns" when an opportunity arrives. He eventually will get another shot on the power play and when it comes, Petry
Grade: B

Alex Plante: Plante played a couple of games for the big club when their defence was decimated by injuries and didn't look out of place. That being said, he still needs to work on his overall game but his size and willingness to drop the mitts will go a long way in helping him secure a spot, long term, in this league. Needs to Work On: His foot spot is a concern and because of it he will have to learn to read the play better and  become more positionally sound.
Grade: N/A


Corey Potter - With the Oilers clearly missing Potter's presence over the last two weeks, it shows how good the veteran AHL defenceman had been earlier this season. While his performance had slipped a bit before spraining his ankle, he was still bringing something to the table on a nightly basis. His point production dried up in November but he continued to be a nice fit on the power play. Needs To Work On: Once Potter returns from his ankle sprain, he must keep from trying to do too much when he returns. He was most effective when he allowed the play to go to him and not rush things.
Grade: B+

Ladislav Smid - The teams # 2 defenceman continued his stellar play with Tom Gilbert and the pair's play has seen little drop off as the season progressed. Ladislav continues to block a truckload of shots, though he has now been passed for the league lead by the Canadiens Josh Gorges. Things are going so well for Laddy that he even managed to score his first goal in almost two years. Needs To Improve On: He continues to try and block nearly every shot and at times, it becomes an issue.
Grade: A

Andy Sutton - The big defenceman has been pretty darn good this season. He was brought in to be nothing more then a number 6 or 7 guy and he has filled the role well. At times he can look big and slow but those occasions have been few and far between. Needs To Improve On: Sutton needs to ensure he is bringing the physical side to his game on a nightly basis. Some nights he looks like he is not interested in that side of the game and that can't be happening.
Grade: B-

Colten Teubert - In all honesty, Teubert was a lot better then I thought he would be. In his eight games with the Oilers, Colten has not looked out of place and has been physically engaged right from the get-go. Even though he's only played a handful of games, Teubert sits third on the club in hits. He understands what his role is and goes out and does it. There is nothing fancy to the rugged defenceman's game and that's a good thing. The simpler, the better. Needs To Improve On: Colten will have to adjust to the speed at the NHL level but he needs to focus on become a dominant defensive player in the AHL first. Once he proves that he can be the guy in Oklahoma City, a spot in the NHL awaits him.
Grade: C

Ryan Whitney - The Oilers best blueliner has been back in the lineup for four games and his game is slowly coming around. The type of injury Whitney suffered last season, usually takes a player a year to recover from. Add to that, another injury he suffered earlier this season and I think it will be very unlikely for Whitney to reach his peak form this season. That being said, if Ryan gets anywhere near last year's level the Oilers should be very happy. Needs To Improve On: Accepting the fact that he likely won't find his "A" game this season. All players want to play at their best but that may not be in the cards for Whitney until the 2012-2013 season.
Grade: B-

October Report Card - Forwards and Coaches
Posted by Oil Drop at 8:33:00 am