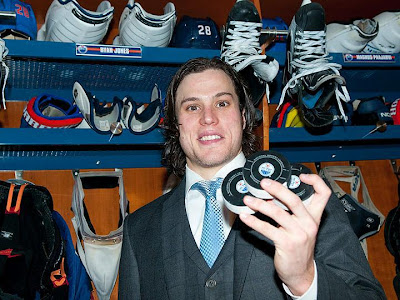 Heading into the third period, the Edmonton Oilers were staring at a fourth consecutive loss, if they couldn't come from behind to beat the Columbus Blue Jackets. The Oilers managed to find their game and did it in style, with a five goal outburst, that was led by winger Ryan Jones. The hard working Jones scored three third period markers, giving the fan favourite his first career hat-trick and the Oilers a much needed victory, by a score of 6-3.

Edmonton started their night off with a bang, opening the scoring just twenty-one seconds in. After Rick Nash took a tripping penalty at the thirteen second mark, it took the Ryan Nugent-Hopkins - Jordan Eberle duo, all of eight seconds to convert on the power play. Eberle took a nice cross ice feed from RNH and buried his tenth of the season. Not exactly the start the Blue Jackets were looking for. To their credit, Columbus came back hard and took it to the Oilers for the rest of the period. They out shot the home side to the tune of 21-7 and managed to even things up, despite the efforts of netminder Devan Dubyk. With Columbus on a two-man advantage, Mark Letestu took a quick pass from Nash and fired a bullet past Dubnyk to draw the visitors even.

Columbus took the lead just past the midway point of the second, when Tom Gilbert blew a tire in his own end. While carrying the puck out of  the Oilers end, Gilbert managed to first fan on his pass and then wipe out in a matter of seconds, which allowed Jackets pest Derek Dorsett to break in all alone and beat the Edmonton netminder for the go ahead goal. Dubnyk didn't help matters, by coming out of his net and charging Doresett with the poorest looking attempt at a poke check that I have seem in some time. The comedy of errors left the Blue Jackets with a one goal lead heading into the third.

Jones squared things up at the 1:41 mark, when he slipped a quick wrap-around past Columbus starter Curtis Sanford. It wasn't a good goal on Sanford's part and his evening was about to unravel...and in a hurry. Less then five minutes later, Ladislav Smid scored his second of the season on a blast from the point that Sanford never saw, courtesy of a Jordan Eberle screen. Smid had gone almost two years in between goals and now has scored two in less then a week. Just like that, the Oilers were in the lead and they kept coming.

Hemsky took a sweet saucer pass from Oilers captain Shawn Horcoff, in full flight, and blew past the Columbus defence and Sanford, before depositing the puck into the gaping Columbus goal. It was a beautiful play and one that the talented winger desperately needed. Edmonton closed out the scoring when Jones scored his third of the period, into an empty net, after both Horcoff and Hemsky decided to pass up shots at the open net.