Could this be it for Ryan Smyth in Oilers silks? 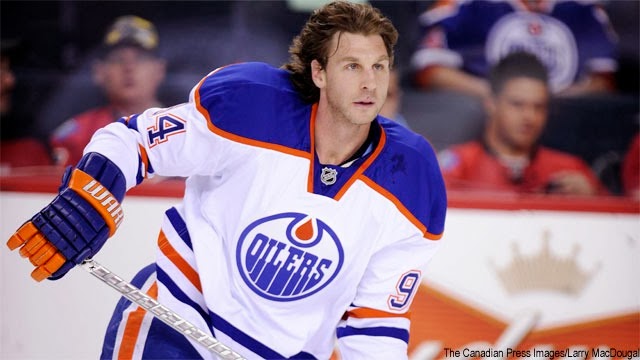 With the NHL Trade Deadline just over 48 hours away, Edmonton Oilers forward Ryan Smyth finds himself in a bit of an odd situation. While Craig MacTavish hasn’t come right out and said it, the Oilers GM has pretty much left the decision of whether or not he moves the veteran winger prior to Wednesday’s deadline up to the player.


There is no question some will look at the situation and think MacT should do whatever is best for the team and simply move the now thirty-eight year old to whatever team is interested in acquiring him. While that is all well and good, it is not so cut and dry when it comes to the guy wearing #94.

Since being selected sixth overall in the 1994 Entry Draft, Smyth has not only gone on to have himself one hell of an NHL career but he has arguably become one of the most popular players in franchise history.
When one considers this organization has produced six Hall of Fame players and won five Stanley Cups during the height of their powers, the fact the native of Banff, Alberta is even mentioned in the same breathe as those players says something about the connection that was made between the player and the fans over the past two decades.

In the minds of many an Oiler fan, Ryan Smyth embodies everything it means to be a member of the Edmonton Oilers. While he may never have been the most skilled player on the team, his work ethic and willingness to do whatever was necessary for the team to succeed, was all that mattered. It was all about the crest on the front of that jersey…which is something many of the Oilers current core of young players have yet to grasp.

Personally, I have always liked Ryan Smyth as a player and what he brought to the table on a nightly basis. However, in my mind, the vast majority of fans in Oil Country have always held him up on a pedestal that I never quite understood. For me, including Smyth with the likes of Wayne Gretzky, Mark Messier, Jari Kurri, Glenn Anderson, Paul Coffey and Grant Fuhr was ridiculous but not so much for others.

One could argue that next to Gretzky being shipped off to Los Angeles back on August 9th, 1988, the trading of Smyth to the New York Islanders in 2007 was the lowest point in franchise history for many Oilers fans. To be honest, that was the moment a large percentage of the fan base turned on Kevin Lowe and having been calling for his head ever since.

Heck people go on about Smyth being one goal shy of becoming the Oilers all-time leader in power play goals, as if that somehow warrants their fanatical love affair with the player. He has never been on the level of an Anderson, Coffey, Fuhr, Kurri, Messier or Gretzky and well never get into the Hockey Hall of Fame but for the current generation of fans, he is their Mr.Oiler. When I approach it from the angle, I get where the masses are coming from.

For the last twenty years, Smytty has bled Copper/Orange and Blue, which included his four plus years playing for three other organizations, and Oilers fans love him for it. Craig MacTavish is no dummy and clearly recognizes the situation for what it is. This isn’t about potential return. It’s about doing what is right.

If Ryan Smyth decides that he would like the opportunity to try and win a Stanley Cup and close the final chapter on his career as a member of the Edmonton Oilers, he should be allowed to do exactly that and on his own terms. In my mind, he will be traded and hopefully the organization can use Tuesday’s game against the Ottawa Senators as a farewell off of sorts.

Giving the fans a chance to let him know just how important he has been to them and giving the player an opportunity to return the favour, would be a fitting tribute to what was wonderful career and a pretty special love affair.