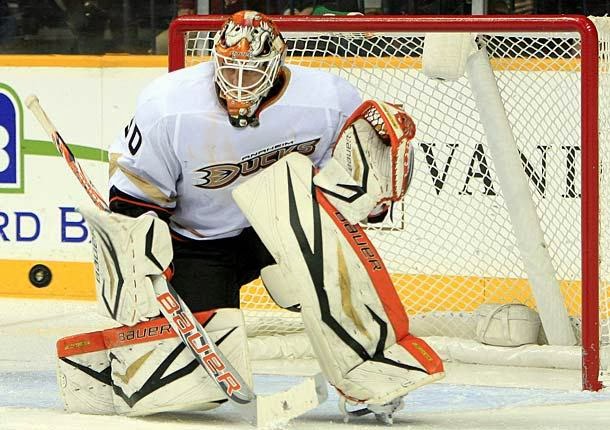 When it comes to fans of the Edmonton Oilers and the local media, many tend to have a very short memory when it comes to goaltenders who wear the Orange and Blue. While the masses appear content with Craig MacTavish’s new goaltending tandem of Viktor Fasth and Ben Scrivens, let’s not forget that it was just five short months ago that many of those same people were all in on Devan Dubnyk being the #1 guy moving forward.


We all know how that movie played out and contrary to what many are suggesting, it is impossible to predict what this new combo will produce. Scrivens has been real good since arriving from Los Angeles but as I’ve previously mentioned, we are talking about a tiny simple size during a stretch when there is truly zero pressure.

As far as Fasth goes, no one knows how good he really is. The Swedish netminder was lights out to start the 2013 campaign, winning his first eight starts and briefly stealing Jonas Hiller’s starting job, but has been nothing but average and injured since. Not exactly a great combination.

Anaheim Ducks goalie coach Dwayne Roloson thinks rather highly of Mr.Fasth and has come right out and said he believes the guy is an NHL starter. Definitely a positive but if the Ducks truly believed that, would they not have kept him for next season and used him in a tandem with rookie sensation Frederik Andersen?

The chances of Anaheim re-signing Hiller seem highly unlikely, unless of course he decides to do the organization a solid and ink a team friendly extension. Perhaps that is exactly what happened and MacTavish was simply in the right place at the right time. Let's hope that was the case.

In my mind, the best part of the acquisition is the fact Fasth turns thirty-two in August. Now it would have been nice to grab a guy with more to his NHL resume than all of thirty games but that wasn’t in the cards. Having a veteran presence in between the pipes is never a bad thing and even more important when we are talking about a team as young and defensively challenged as the Oilers.

Having said that, the guy has to be able to stop the puck and according to all reports, Fasth still has that ability. The other big positive, he has only one year remaining on his $2.9 million deal. Can you say zero risk? MacT clearly can.

On the downside, as good as the start to his career was, he went from potential stud to #3 on the depth chart in a real hurry. Add his recent injury history into the equation, which is not uncommon for goaltenders that are over the age of thirty, and this no longer looks like the sure bet many Oilers fans are hoping it will be.

The duo of Ben Scrivens and Viktor Fasth are unquestionably an upgrade on this year’s version of Devan Dubnyk but considering they have combined to play just 89 National Hockey League games, there is nothing to suggest either one are better than the pre 2013-14 edition of the Oilers former starting goalie.

A scary thought when you realize that version of Mr. Dubnyk wasn’t good enough for this group to show any real improvement in the standings. Craig MacTavish and the Edmonton Oilers are banking on at least one of these guys turning into a #1 goalie and for their sake, they had better hope that is exactly what occurs. Spending $5.2 million on your goaltending is all well and good but if they’re not up to snuff, it will most certainly come back to haunt this club in 2014-15.
Posted by Oil Drop at 11:38:00 am