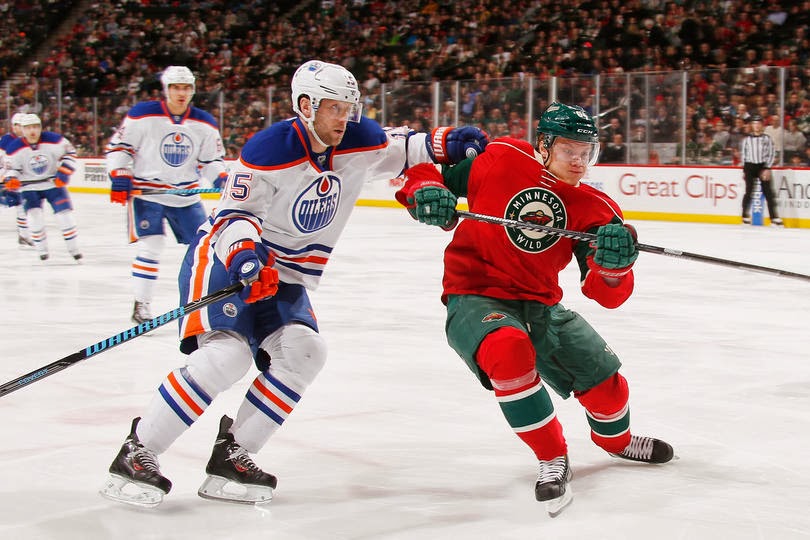 Nick Schultz has been a member of the Edmonton Oilers for what amounts to two seasons. Since being acquired from the Minnesota Wild in exchange for Tom Gilbert at the 2012 NHL Trade Deadline, the veteran blueliner has had his fair share of struggles in Orange and Blue.

With unrestricted free agency staring him in the face and Edmonton having zero interest in bringing the thirty-one year old vet back in 2014-15, it appears as though his time in Oilers silks are about to come to an end. While Schultz may not be enjoying his finest campaign, chances are Craig MacTavish should be able to secure amid to late round pick from a club looking to add both depth and experience to their backend for a potential post-season push and/or run.

The Boston Bruins have been rumoured as a possible destination for Schultz for the last number of weeks. With Dennis Seidenberg on the shelf following knee surgery and Boston’s blueline featuring Zdeno Chara, Johnny Boychuk and bunch of talented but young defencemen, adding a guy like Schultz would make perfect sense. The cost would be minimal and used in a bottom pairing role and on the penalty kill, the former Minnesota Wild captain could be a nice fit.

The other advantage for the Bruins, if they need Edmonton to eat some of his $3.5 million salary, the Oilers would be willing to listen…especially if it meant they would be getting a better draft pick in return. Does that make a potential deal a “sure thing”? Not necessarily but the fact MacT can work with potential suitors, should make moving Schultz far easier to accomplish.

A team like the Pittsburgh Penguins could be in the market for a pure rental, with both Kris Letang and Paul Martin out, to help lightening the load in the short-term and give them extra depth heading into the playoffs. As much as Schultz has struggled in Edmonton, as a #6/#7 D man, he would be a good fit on almost any playoff team.

Would the Wild have interest in bringing him back for a late season push at earning a playoff spot? He already knows a bunch of guys in the room, the system they play and when you consider Ryan Suter plays half the game on his own, his responsibilities would be minimal. If nothing else, he is a perfect insurance policy.

The market for Nick Schultz won’t be huge but when it comes down to it, you can bet on GM’s across the league calling Craig MacTavish on the potential cost of the veteran rearguard. More often than not, teams who generally go deep into the Stanley Cup Playoffs have depth within their lineup and especially on their backend.

With the cost being minimal at best, I find it hard to believe that the Oilers #15 won’t have find himself in a different NHL city by Wednesday afternoon.