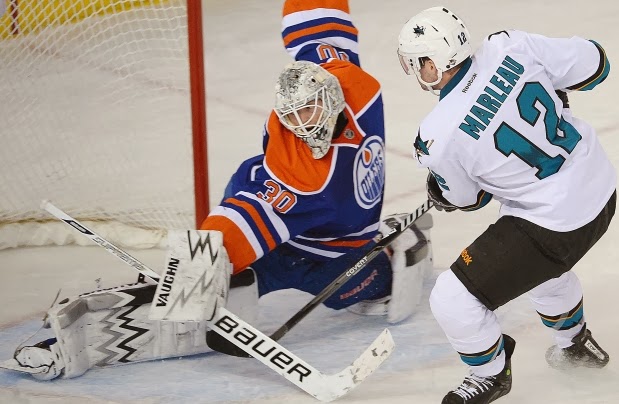 At approximately 10 am on Monday morning, the Edmonton Oilers announced they had decided to take the first step in trying to shore up their netminding come next season. In agreeing to sign Ben Scrivens to a 2 year/$4.6 million deal, Craig MacTavish has secured the first piece of what will likely be a two part job.  In today’s NHL, the vast majority of teams run with your traditional setup in between the pipes. They have their starting goalie  and a second guy who comes in and holds the fort when the needs arises.
That clearly won’t be the case in Edmonton come 2014-15, as the Oilers will be taking the goaltending by committee approach…albeit a committee of just two.  While MacT has more than a few holes to patch up prior to the start of next season, priority one has to be bringing a sense of stability to their own end of rink. The rookie GM is banking on Scrivens being the first step in accomplishing just that but yesterday’s signing in no way shape or form means he has found his new starting netminder. In fact, it looks to mean the complete opposite.


While Scrivens has been lights out during his brief stint in Orange and Blue, let’s not lose sight of the fact it has been just that. We are talking about seven games here. That’s the sort of workload a full fledged #1 would generally see over a two week stretch, where as the twenty-seven year old has played his seven games over a full month and featured an out of body 59 save performance against the San Jose Sharks.
There’s a big difference between starting two of every three and sharing the load with your partner…just go and ask Devan Dubnyk.
Shortly after yesterday’s announcement, OilersNation’s Robin Brownlee had the following to say via twitter. “With the Oilers needing to make a call on goaltending, Scrivens has performed like Dubnyk failed to. Simple as that.” While that statement rings true to a certain extent, the reality if the situation is Scrivens has basically accomplished the exact same thing Dubnyk did in previous seasons. He has played well in games that are essentially meaningless. People may not want to hear that but it is the truth.
This team has been out of it since November 1st and while there may be pressure to keep from continually getting embarrassed on a nightly basis, like the Oilers have for much of this year, that is a completely different animal from starting the season on level terms with the other 29 teams in the NHL. Dubnyk was handed that opportunity this year and he cracked under the pressure. Now that doesn’t mean Scrivens will do the same thing but simply anointing him as the guy moving forward, as a large chunk of the fan base has already done, would be a big mistake.
If the organization was sold on the idea of Ben Scrivens being their starter for the foreseeable future, do you not think Craig MacTavish would have signed him to a longer term deal? The answer to that question is obvious and is the reason why the Edmonton Oilers will employ a two-headed monster in goal come next season. That said, the one thing yesterday’s deal all but guarantees, is Edmonton likely won’t go big game hunting for a goaltender via free agency. If anything, the chances of them trading for a Craig Anderson or someone of that ilk, just increased.
Posted by Oil Drop at 11:48:00 am