It's not working Dallas!!! 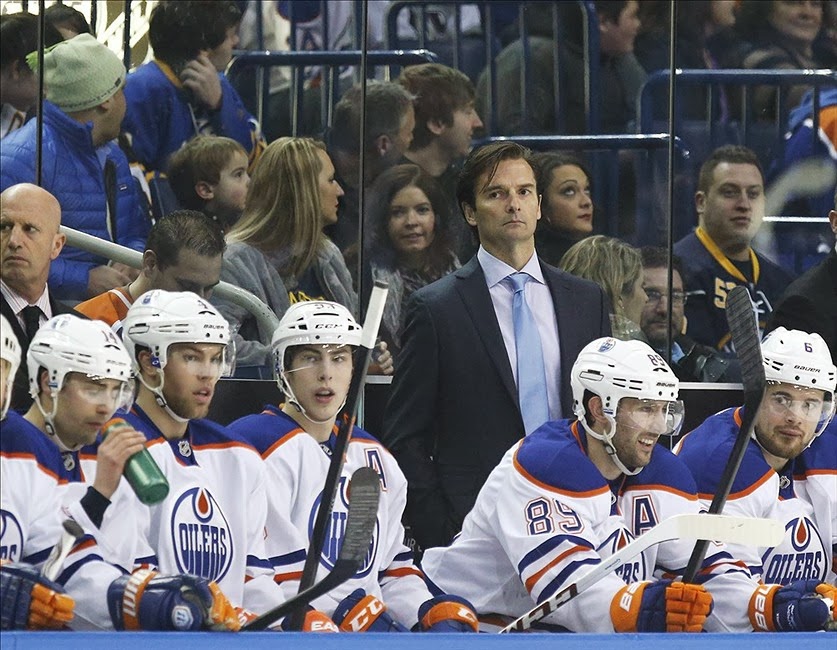 Of all the things that have gone wrong with the Edmonton Oilers 2013-14 campaign, the one problem that stands out above the rest has been the ineffectiveness of this club’s power play. After years of struggling to produce on the man advantage, the coaching duo of Ralph Krueger and Tom Renney combined to come up with something that actually worked over the previous two National Hockey League seasons.
In 2011-12. the Oilers finished third in the league with a 20.6% rating on the PP and were one of only three teams, the others being the Nashville Predators (21.6%) and the San Jose Sharks (21.1%), to crack the 20% barrier on the year. While Edmonton slipped back to seventh spot in 2013 with a mark of 20.1%, which was the exact same number posted by the Sharks, much of that can be attributed to Ryan Nugent-Hopkins playing the entire year on a bad shoulder.

The fact the Oilers production took such a major spike in ’11-’12 from their 2010-11 total of 14.5%, good enough for 27th spot, was because of one person in particular and that would be Mr. Nugent-Hopkins. From the moment the former Red Deer Rebels star centre made his debut in Orange and Blue, Edmonton instantly became a major threat on the man advantage. However, that has all changed under the Oilers new bench boss and one can’t help but the question why.
The personnel is really no different than last season and in all honesty, one could argue it is actually a little better. With the addition of David Perron into the mix, what should have been a nice add in Anton Belov and a healthy RNH, how exactly is this team sitting 20th the entire NHL on the PP?
The Oilers have been among the leagues most potent power play units on home ice in each of the last two seasons and that hasn’t changed in 2013-14. Despite their recent struggles, they still are plugging away with an efficiency rating of 22.6% at Rexall Place, which is good enough for the six the best number in the entire NHL. Where we see the big difference, is on the road. After Renney and Krueger had them finish in 11th and 9th place respectively, Eakins has this year’s edition producing at a 10.6% clip, which leaves them in an eye-popping 27th place. How is this possible? Your guess is a good as mine.
To make matters worse, after giving up a combined nine shorthanded goals against over the past two seasons, they have already coughed up eleven this year and that number looks as though it will grow even bigger before the year is out. Some point to Eakins using four forwards on the man advantage as being the problem but that’s not exactly a new wrinkle to the Oilers power play.
The previous two coaching staffs employed the same sort of strategy and the results were never this one sided. The bigger problem seems to be Eakins’ insistence in using a 1-3-1 setup on the power play. In theory it could and even should work but the problem is, it isn't working and he simply refuses to try something else or god forbid…..revert to what worked in the past. While the rookie coach has suggested that opposing teams have adapted and learned to  take away what had worked in previous seasons on the power play, the fact of the matter is he and his staff haven’t been able to make adjustments to overcome what their opponents are doing.
Sorry but is that not coaching 101?
I am all for changing it up as Eakins has but if it is not working, why on earth would you keep going to that same well? The answer is quite obvious. This coach is stubborn and until he learns to accept his way may not always be the best way, this team will struggle to have success. While the players are ultimately the ones that need to produce on the ice, when it comes to your special teams, the coaching staff generally plays a huge role. Much like a bullpen in baseball, how a coach handles his penalty kill and power play units are game changers when it comes to hockey.
While Edmonton’s last two coaches may have had their flaws, they excelled in both of these areas. Heading into this season, everyone expected the Oilers penalty kill to take a step back with the employment of many of their younger players into the kill. It was made that much worse with the god awful goaltending they received to start the season but to their credit, the PK has bounced back to respectability after what was just a horrendous start. Whereas the power play has been the complete opposite end of the spectrum. After getting off to a decent start on the man advantage, they’ve been chasing their tales ever since.
Obviously, there needs to be some sort of structure in place but any skilled player will tell you the best power plays are the ones that allow their players to ad lib. Be it the system itself or the fact these players are simply not comfortable employing it, it just isn’t working. On most nights they have trouble even setting the damn thing up, which is a major red flag in itself. Some of this is unquestionably due to a lack of confidence but not all of it. Talented players are usually most comfortable when the opposition are a man down and they have more time and space to work with. When it comes to the Oilers skilled players, they  look like a bunch of guys who are terrified to make a mistake.
The time has come to go back to what actually worked in the past Dallas and by the way, don’t  be afraid to loosen the reins just a tad. Who knows these guys might actually go back to enjoying themselves on the ice…last time I checked having a bit of fun wasn’t against the rules.
Posted by Oil Drop at 10:10:00 am