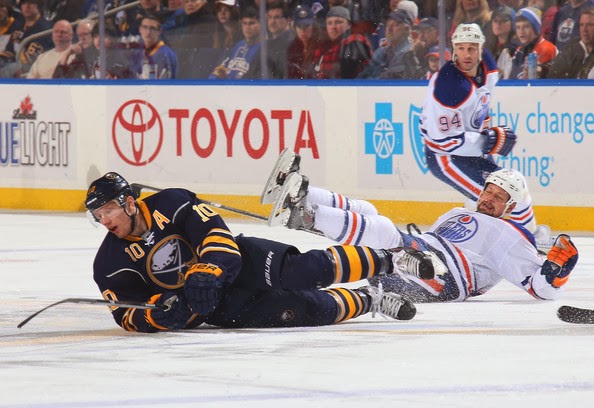 In a perfect world, the Edmonton Oilers would walk away from the 2014 NHL Entry Draft with defenceman Aaron Ekblad in their back pocket. As of this moment, they sit 29th in league standings and are just three points ahead of the last place Buffalo Sabres. While the Sabres have won two straight since the Olympic break, they have already started to deplete their roster via trade.


After sending netminder Ryan Miller and centre Steve Ott to the St. Louis Blues in exchange for Jaroslav Halak and winger Chris Stewart, Buffalo appears ready to blow things up. General Manager Tim Murray said he was “open for business” in an interview on Tuesday afternoon and the rookie GM wasted little time in making his first big splash on Friday afternoon.

He has already spoken to Christian Ehrhoff about moving the blueliner prior to Wednesday’s NHL Trade Deadline and word is he would seriously consider parting with Stewart…if the price were right. With their eye clearly on the future, one would think Murray would have interest in acquiring another lottery pick.

From Edmonton’s standpoint, giving up a potential top two selection and the opportunity to draft the franchise defenceman this organization so desperately needs, wouldn’t be easy. However, there is no guarantee they would even get that chance and with the situation being what it is in Oil Country, perhaps now is the time for MacTavish to look at pulling off that “bold move” everyone continually reminds him about.

In Ehrhoff and Stewart, the Sabres have two pieces that would unquestionably interest the Oilers. On their own, neither one would be enough for MacT to consider moving his first round pick but having the chance at reeling in both in some sort of package deal, would be a completely different situation.

While Stewart has just one year remaining on his two year/$8.3 million deal, he possess the exact skill set Edmonton are looking to add into their top six forwards. At twenty-six years of age, he fits in beautifully with the Oilers young core upfront and is on the verge of entering what should be the prime years of his NHL career.

As far as Ehrhoff goes, the thirty-one year old would instantly become Dallas Eakins’ #1 D man and while he may not be the “stud” defenceman many are hoping for, the former Vancouver Canuck is a legitimate top pairing guy.  The talented German blueliner plays in all situations and is the minute eating machine the Oilers are hoping to add prior to the 2014-15 campaign.

If MacTavish were able to add Ehrhoff and another top four defenceman into the mix, as had been suggested many a month ago, Edmonton would go from having arguably the league’s worst defence to one that should give them a chance at competing on a nightly basis. Ehrhoff does come with a favourable cap hit of $4 million but on the downside, he is signed until the end of the 2020-21 season.

From a Sabres point of view, picking up another top end first round pick could quite literally rebuild their franchise overnight.  Buffalo not only has their first rounder but could very well end up with the New York Islanders selection, courtesy of the Thomas Vanek/Matt Moulson trade. Now the Isles could defer the pick to 2015 but considering New York could be in for another tough season and the potential of drafting Connor McDavid staring them in the face, they may actually allow Buffalo to use it on June 27th in Philadelphia.

As of right now, the Sabres own three second round picks in 2014 and depending on what the Islanders decide to do, Buffalo could have themselves three first rounders and three second rounders in 2015. No matter how you slice it, they are going to add a ton of young talent into their organization over the next couple of years.

Dealing for the Oilers pick could see them walk away with at least two, if not all three, of Sam Bennett, Ekblad and Sam Reinhart from this year’s draft and the very real possibility of grabbing McDavid and another high end talent in June 2015. Would that not be enough to take their chances at sending Christian Ehrhoff and Chris Stewart packing for the Edmonton’s first and another piece?

One would think so and my guess is Craig MacTavish would be more than willing to help him make it happen.
Posted by Oil Drop at 5:13:00 pm