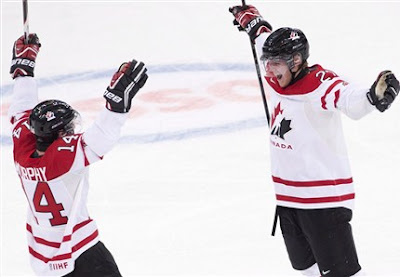 On the strength of another three points from Edmonton Oilers centre Ryan Nugent-Hopkins and some solid team play, Team Canada had little trouble dismissing Nail Yakupov and Team Russia, by a score of 4-1 in the final game of the preliminary round at the 2013 IIHF World Junior Championship.

First period power play goals from Dougie Hamilton and Mark Schiefele proved to be too much for Russia to overcome, despite an outstanding forty-four save performance from netminder Andrei Makarov.

Malcolm Subban continued his strong play in goal for Canada, stopping twenty-one of the twenty-two pucks fired his way, as the young puckstopper improves to 4-0 on the tournament.

After what was a frenetic pace to kick off what most expected to be "the" game of the preliminary round, the Russians would blink first. Valeri Nichushkin was assessed a five minute major and a game misconduct for drilling defenceman Tyler Wotherspoon into the boards, on what was a rather easy call for the officials. It was a silly decision by the young Russian and one that would prove rather costly.

Canada took full advantage of the gift they were handed, as Dougie Hamilton and Mark Schiefele both connected on the power play, with Nugent-Hopkins picking up assists on both goals. The Oilers young centre was at his best on the extended man advantage, creating chance after chance, and if not for the stellar play of starter Makarov, Canada could have put this one away early.

However, the Russia had a glimmer of hope, after a late turnover by Schiefele would allow the host nation to get on the scoresheet.. Feeling the heat from the Russian forecheck, Canada's leading goal scorer, inexplicably through the puck into the slot and seconds later, Nikita Kucherov had made it a one goal game.

Up until that point, Canada could not have asked for a better opening twenty minutes. The carried the majority of the play, thanks to the extended man advantage, were fairly solid in their own end and played a physical, yet discipline, brand of hockey.

They would extend the lead to 3-1, at the 6:30 mark of the second, as RNH teamed up with Jonathan Drouin, for his third assist on the night. Having gained possession inside the Russian zone, the former first overall selection, flipped a lovely saucer pass on goal, that the speedy seventeen year old quickly corralled and turned into a nifty little wraparound, that found its way behind a startled Makarov.

Nugent-Hopkins led the tournament in scoring through the preliminary portion of the competition, with eleven points in four games, and will look to add to that total during Canada's semi-final appearance.

Despite the two goal deficit, the Russians continued to push but were unable to sneak another puck past the Belleville Bulls star netminder. While not tested as often as he was against Team USA, Subban was there when called upon. His best save of the bunch being a splendid pad stop off Andrei Sigarev, courtesy of a great feed from Mikhail Grigorenko and an ill-timed turnover by Ty Rattie.

Jonthan Huberdeau would close out the scoring late in the third, lobbing home his second of the tournament into an empty net, to make it a 4-1 final. At the end of the day, the shot clock said it all...Canada 48 - Russia 22.

Boone Jenner returned to the lineup, after missing the first three games due to suspension, and the Oshawa Generals forward was a force all night long. Teamed with Brett Ritchie and Phillip Danault to form Canada's third line, the trio were a thorn in the Russian's side from the moment they hit they ice.

With the loss, Russia will now take on Switzerland in quarter-final action, while Canada automatically qualify for the semi-finals. Steve Spott's squad will gladly take the extra day off to rest up and prepare for the winner of the Czech Republic vs USA quarter-final matchup.