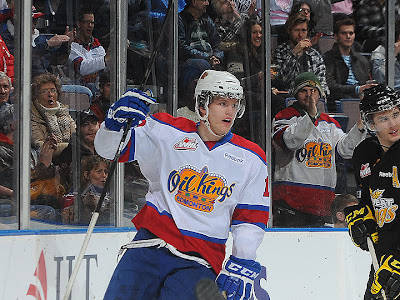 On the strength of Henrik Samuelsson's first career hat-trick and a pair of goals from defenceman Keegan Lowe, the Edmonton Oil Kings brought their most successful year in franchise history to an end, destroying the Brandon Wheat Kings by a score of 6-2.

Goaltender Laurent Brossoit pushed his personal winning streak to five straight. as the Oil Kings improved to 25-8-2-3 on the season, building their lead atop the Western Hockey League's Eastern Conference to three points over the Calgary Hitmen.

First period goals from Mitch Moroz and Samuelsson staked Edmonton to an early 2-0 lead but a late goal from Tim McGauley brought the Wheat Kings to within one. Unfortunately for Brandon, that would be as close as they would get.

A pair of second and third period markers from both Lowe and Samuelsson, turned this one into a laugher. The two goal effort from Edmonton's current captain, was the first mutil-goal game of his career, as he continues to add to his outstanding season. The nineteen year old leads all Oil Kings defencemen with eight goals, as he continues to lead the way with rock solid play in his own end.

For Samuelsson, his three goal effort pushed him past Michael St. Croix for the team lead in goals, with twenty-two. The Phoenix Coyotes first rounder continues to impress in his second season with the Oil Kings, as he continues to morph into one of the finest power forwards in the entire Western Hockey League.

The rugged winger became the fourth Edmonton forward to register a hat-trick this season, joining St. Croix, T.J. Foster and Curtis Lazar. St. Croix has turned the trick twice, including a four goal effort against the Regina Pats, matching Foster's earlier outburst in Calgary against the Hitmen.

The defending WHL champs will kick off the 2013 portion of their schedule on Thursday night, as they pay a visit to the Lethbridge Hurricanes. After their brief one game trip, Edmonton will return home to the friendly confines of Rexall Place. to play host to the Vancouver Giants on Saturday night.
Posted by Oil Drop at 1:44:00 pm