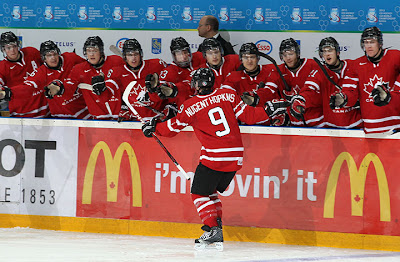 On the strength of a two goal performance from captain Nail Yakupov and an superb overtime winner from Valeri Nichushkin, Team Russia took home the Bronze Medal from the 2013 IIHF World Junior Championship, edging Team Canada 6-5 in Ufa, Russia.

The loss marks the first time Canada were unable to secure a medal, regardless of colour, from the World Junior Hockey Championship, since 1998.

Team Canada captain Ryan Nugent-Hopkins was fantastic in defeat, collecting another four points on the afternoon and finishing with a tournament leading fifteen for the championship. The Edmonton Oilers star centre not only had a hand in fifteen of Canada's twenty-seven goals in the tourney but also became the highest scoring captain in the team's glorious World Junior history.

Netminder Jordan Binnington was given the start in goal by head coach Steve Spott and the Owen Sound standout had a tough go of things, allowing three goals on just five shots, before being yanked in favour of Malcolm Subban. The Belleville Bulls tender was solid in relief but would ultimately take the loss, after being beat by Nichushkin's brilliant individual effort.

- What else can you say about Nugent-Hopkins that has not been said already? The kid was outstanding throughout the tournament and finished off his lone World Juniors appearance in style, with a signature four point performance. Unfortunately for RNH, he couldn't get the job done against Team USA in the semi-finals but his coach did him no favours, by not not playing him nearly enough in the opening twenty minutes. At the end of the day, the Nuge was not only the tournament's leading scorer but was by far and way the best player in the tournament.

- Subban was excellent in relief of Binnington, after being unceremoniously dumped as Canada's starter for the Bronze Medal matchup. While he was given the hook midway through the semi-final loss to the Americans, the young netminder was not to blame for the thrashing Canada received. In my mind, the kid earned the right to start against the Russians but apparently the coaching staff did not agree. Subban made a number of huge stops, keeping his team in it and allowing them a chance to fight back but in the end...it wasn't good enough

- Jordan Binnington was put into a tough spot and unfortunately for him, he fell well short of the performance needed to help his team come home with a medal. The young netminder not only allowed three goals on five shots but two of them were downright awful and both could not have come at worse possible times for his teammates. In less than eight minutes and put his team in a massive hole, that they simply could not recover from. That being said, Binnington had not started a meaningful game since December 8th, making the move to turn to the nineteen year old puckstopper, even more perplexing.

-  Team Canada's defensive zone coverage was an issue for much of the tournament and not much changed in this one. Be it at even strength or on the penalty kill, this squad struggled badly in their own end and it cost them dearly. Not to pick on defenceman Ryan Murphy, who put together a three point effort on the afternoon, but the Kitchener Rangers blueliner was nothing more than a pylon for much of the tournament. Yet he was continually fed ice time and played a major role, along with Toronto Maple Leafs prospect Morgan Rielly, on Russia's overtime winner. Simply put, they were nowhere near good enough.
Posted by Oil Drop at 6:31:00 am