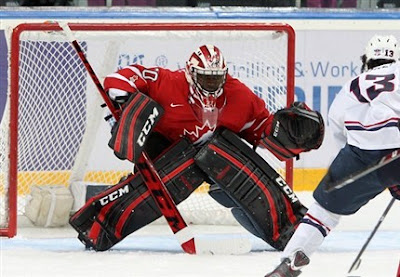 After hearing nothing but criticism about his play heading into the 2013 World Junior Championship, Malcolm Subban silenced his critics on Sunday afternoon, with a brilliant thirty-six save performance. The Team Canada netminder took his game to the next level, leading his side to a crucial 2-1 victory over Team USA.

For the first time in the preliminary rounds, Canada would be pushed and their response was exactly what head coach Steve Spott was looking for. Both sides came out hard and exchanged early chances but it would be Ryan Nugent-Hopkins, who would strike first.

Mark Scheifele won a key face-off in the Team USA zone and Team Canada captain did the rest. The Edmonton Oilers centre took a quick feed from Jonathan Huberdeau, before beating John Gibson with a perfect shot, low to the stick side. It was RNH at his very best...coming up large when his team needed it most.

The netminders would take over from there. Gibson stoned defenceman Ryan Murphy, with a monster stop on a three-on-one break, keeping it a one goal game. Subban would not be outdone, as he followed that up with big stop of his own, denying John Gaudreau on clear-cut breakaway.

Canada would make the most of their goaltender's timely stop, as Ryan Strome notched his fourth of the tournament, courtesy of a brilliant feed and some hard work from Brett Ritchie. That made it 2-0 Canada but their young netminder would come up with two more great stops before the period was out.

Subban made an absolutely ridiculous blocker stop off Seth Jones in the dying seconds and followed that up with another save off Sean Kuraly, to preserve the lead.

A four minute high-sticking penalty to the Edmonton Oil Kings defenceman Griffin Reinhart, would put Canada behind the eight-ball in period two but their netminder was up to the challenge. The Belleville Bulls standout was simply outstanding during the extended American man advantage, turning aside all eight pucks fired his way.

Through forty minutes of play, Canada held a two goal cushion on the scoreboard but the Americans had a 25-19 lead on the shot clock.

Team USA would finally get one past Subban, as Jacob Trouba received a friendly bounce, before wiring a quick shot through the Canadian netminder's legs. While the back-to-back penalties handed out to Canada proved costly, it was another brilliant stop from Gibson, that paved the way for the America's icebreaker.

After being caught on yet another odd man rush, the Gibson was called upon to stop Ty Rattie on a two-on-one and the Kitchener Rangers puckstopper did just that and seconds later, it was a one goal game.

The Canadians were clearly rattled and Team USA did everything to try and find a quick equalizer but Subban came up large again, with a number of key stops...the best being a spectacular pad stop off Ryan Hartman.

From that point on, it was an endless parade to the penalty box and one that saw Team Canada handed two five-on-three advantages but Gibson simply shut the door, in keeping it a one goal game. Though he did get a little help from his goal post, as Nugent-Hopkins rifled a loose puck off the bar, with the American goalie down and out.

After failing to seal the deal with a power play goal, Canada would hand Team USA a power play opportunity of their own, as RNH took a foolish boarding minor in the final seconds. Fortunately for Spott's men, the penalty killers got the job done and Subban continued to vacuum any and all loose pucks.

The win leaves Canada atop Group B with a perfect 3-0 record but it will all come down to tomorrow's showdown with Russia, who sit second in the group, with eight points.
Posted by Oil Drop at 6:21:00 am