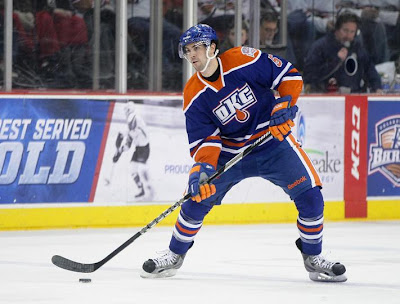 A first period natural hat-trick from Jordan Eberle and yet another three point night from his Edmonton Oilers teammate Taylor Hall, helped the Oklahoma City Barons close out 2012 with their fourth straight victory, by a score of 5-2 over the visiting Texas Stars.

Blueliner Justin Schultz continued his assault on the American Hockey League's record book for defencemen and rookies, registering another goal and an assist, in what has been a memorable start to his professional career.

Netminder Yann Danis was outstanding in the win, stopping forty-two of the forty-four pucks fired his way, improving his record to 13-7-0-3 on the year. Centre Mark Arcobello had another productive night, picking up a pair of helpers, bumping him inside the top twenty in league scoring, with twenty-eight points.

After neither side could find the game's first goal inside the opening fifteen minutes of play, Eberle would change the entire complexion of the game in a span of just under three minute...starting at the 15:44 mark.

The former thirty-four goal man would finish a lovely feed from Hall for his first of the night, on a perfectly executed odd man rush. Seconds later, the two Edmonton Oilers teammates would gain entrance to the Stars zone and in a blink of an eye,  Eberle beat Chirstoph Nilstrop for his second goal in seven seconds and the Barons were up a pair.
.
He would complete the trick on the man advantage, just under two and half minutes later, flipping home his twenty-third of the campaign  on a nifty little finish in tight and following a superb pass from Schultz. After twenty minutes of play, the shot clock favoured Texas 12-7 but the scoreboard had Team Eberle up 3-0.

Colton Sceviour would beat Danis at the 7:11 mark of period two, cutting the lead down to a pair, but Schultz would restore the three goal bulge, before the period was out.  The talented rearguard's point shot found its way past a screened Nilstrop, for his seventeenth of the year, which is good enough for third spot among all skaters.

Eberle picked up his fourth point and Hall registered his third assist on the goal, moving the former first overall selection into a tie for fifth place in league scoring. His thirty-two points, in just twenty-one games, played leaves him only three points back of Springfield Falcons forward, Cam Atkinson, for third in league scoring.

While Eberle and Schultz continue to sit atop the American Hockey League scoring race, with forty-seven and forty-five points respectively. Hall's average of 1.39 points per game, is not far off the pace set by his teammates, Eberle - 1.52 PPG / Schultz - 1.45 PPG, after registering his eleventh multi-point game of the season and fifth three point outing.

The win leaves the suddenly red-hot Barons just two point shy of the first place Charlotte Checkers in the South Division, despite playing two fewer games. Their latest run has also seen them climb to with three points of the Western Conference leading Toronto Marlies.

The Barons do not have to wait long to kickoff the 2013 calender year, as they travel to Houston to pay a visit to the Houston Aeros on Tuesday night. The Aeros have given OKC all sorts of fits this season, going 5-1 against their South Division rivals, three of which coming via a shootout.

Netminder Matt Hackett, has had the Barons number all season long, posting a perfect 4-0 mark against Oklahoma City.  The former third round pick of the Minnesota Wild, has been almost unbeatable in the shootout, stopping twelve of the fourteen attempts, in his three shootout victories.
Posted by Oil Drop at 6:28:00 am