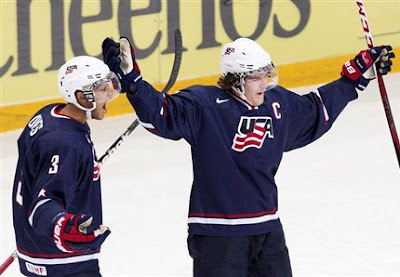 An all out blitz from Team USA proved to be far too much for a flat Team Canada, that simply forgot to show up for the opening forty minutes of their semi-final matchup at the 2013 IIHF World Junior Championship. The Americans 5-1 victory leaves Canada the opportunity to bring home nothing more than a bronze medal, from Ufa, Russia.

It was all Team USA from the drop of the puck, as they dictated the pace from outset and watched Canada come out as flat as a pancake and fumble the puck all over the ice. They would be rewarded for their hard work at the 7:18 mark, as Jake McCabe's shot found its way through a maze of bodies, eight to be exact, and past a helpless Subban.

The American blueliner would than make it 2-0, before the period was out, sending another shot on goal that Canada's netminder has yet to see. As if coming out with no energy wasn't bad enough for Steve Spott's men, it appeared as though many wanted to take a crack at playing goal, instead of leaving that in the capable hands of their young netminder.

For reasons known only to Spott and his coaching staff, Canada seemed more interested in matching lines, than feeding the likes of Ryan Nugent-Hopkins ice time in the early going. While the Americans went about their business and attacked for the full sixty minutes.

Not much would change in period two, as John Gaudreau would extend the lead to three, after an awful line change allowed the Americans to turn what looked to be a nothing play, into a two-on-one break.
Gaudreau made Ryan Murphy look absolutely foolish, with a nifty little move, before ripping home his tournament leading sixth of the championship.

Just over four minutes later, Jim Vesey would bring Subban's night to an early end, beating the Team Canada netminder with a perfect shot to the stick side. It was a gorgeous finish from the Team USA forward, after blowing past Xavier Oullet, as if the Canadian blueliner were nothing more than a pylon in his way.

Jordan Binnington would replace Subban after the 4-0 goal, and the Owen Sound puckstopper did his best to keep Canada in it but there was no way they were getting four pucks behind John Gibson. At the best of times, it is no small feat to score four goals against any netminder...let alone the best tender in the tournament.

Ty Rattie would break Gibson's shutout bid with a shorthanded marker early in period three, that frankly should not have counted. While Rattie's third of the tournament was ultimately a good goal, the on ice official clearly blew his whistle, for reasons known only to himself, before the Canadian forward deposited his own rebound into a yawning American cage.

The goal gave Canada life but they could not get another one behind the Kitchener Rangers starter. The talented guardian shut the door the rest of the way, including a stunning bit of netminding during a late Team Canada power play. Gibson finished the night with thirty-three stops and has now allowed just eight goals against, for the entire championship.

Gaudreau would close out the scoring, beating Binnington on a breakaway, for second of the afternoon and seventh of the tourney for the Boston College standout. It was the final nail in the coffin, in what could be described as nothing other than an embarrassing afternoon for Hockey Canada.

Team USA now awaits the winner of today's second semi-final between Sweden and Russia, to find out who their opponent will be in Saturday's gold medal final. The loser will now face Canada in the bronze medal game, which goes prior to the tournament finale.
Posted by Oil Drop at 5:02:00 am