2013 World Juniors: Subban will play a key role in Canada's run for Gold 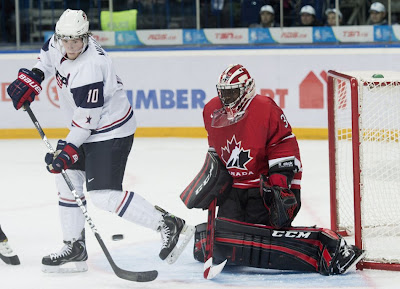 Heading into the 2013 IIHF World Junior Championship many had their doubts about Canada's netminding, with most of the uncertainty lingering around the play of projected starter Malcolm Subban. While the Belleville Bulls standout has silenced all of those critics with his two most recent performances against Team USA and Team Russia, all anyone will remember, will be his performance at crunch time.

After looking a little shaky during his first two starts of the tournament, the Canadian puckstopper came up large when it mattered most. Having said that, as Canada awaits the winner of the USA vs Switzerland quarterfinal, all eyes will be firmly planted on #30.

For all the praise Subban has received in recent days for his back-to-back splendid outings, you can bet those same critics will jump all over the young man should he allow a questionable goal to find its way behind him, during the elimination portion of the competition. Fortunately for his teammates and head coach Steve Spott, the youngster does not appear to rattle easily.

With his on ice demanour very much resembling that of Edmonton Oilers Hall of Fame goaltender Grant Fuhr, the nineteen year old goaltender has to be an absolute treat to play in front of. You would be hard pressed to find another goalie in junior hockey that plays the position as calmly as Subban does.

Sure he has his hiccups from time to time but his body language usually tells a different story. Add to that, the fact he never appears to blame his teammates for any puck that gets behind him and you suddenly have the makings of goalie that players would do absolutely anything  for.

With Malcolm currently looking as confident as he has at any point since pulling on his Team Canada jersey during the selection camp in Calgary, goaltending will be the least of Canada's worries moving forward. At this stage of the game, would anyone really expect anything but a solid outing from Subban in the semi-final and/or final?

Back on December 26th, 2012 you could almost count the number of people on one hand that felt Subban should be given the starters job ahead of Jordan Binnington and simply be allowed to run with it. While I was one who had little doubt about the level of play Canada would receive from the Boston Bruins first rounder, thankfully Spott and goaltending coach Ron Tugnutt remained firmly in their goaltender's corner.

Make no mistake, come Thursday morning, all eyes will be on two players: Malcolm Subban and Ryan Nugent-Hopkins. One being their captain and best player, the other being the last line of defence.

From this point on, there is no longer a tomorrow to fall back on. It is time to put or shut up for Team Canada and for this squad to have any hope of walking out of Ufa, Russia with a gold medal around their collective necks, their goalie will have to be at his very best.

A challenge which their talented netminder looks both poised and ready to take a run at and quite frankly, one would be foolish to bet against him.
Posted by Oil Drop at 2:09:00 am