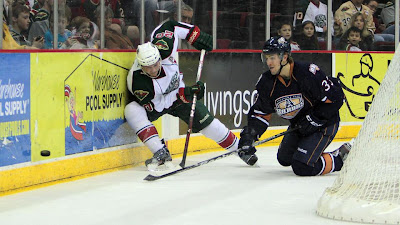 Despite two more goals from Edmonton Oilers forwards Jordan Eberle and Taylor Hall, the Oklahoma City Barons continued their losing ways when it comes to the Houston Aeros. Tuesday night's 4-2 loss marked the sixth time in seven meetings the Barons have fallen to their South Division rivals.

Houston netminder Matt Hackett continued his dominance over Oklahoma City, improving to a perfect 5-0, making twenty-eight stops on the night. Jason Zucker led the way up front with a pair of goals and an assist, giving the Aeros forward five goals on the season against the Barons.

Eberle picked up another two points in the losing effort, giving him forty-nine on the season, extending his lead atop the AHL scoring race to four points over teammate Justin Schultz. Hall , who opened the scoring with his thirteenth of the season,  moved the talented winger into sole position of fifth place in league scoring.

After the former first overall pick of the Edmonton Oilers put the Barons out in front with his league leading eighth power play marker of the year, Houston would rebound with a pair of goals inside the opening five minutes of period two.

Zucker would even things up with Teemu Hartikainen off serving a minor penalty for hooking, beating Yann Danis with a quick shot to the blocker side. Charlie Coyle would give the Aeros their first lead of the night, just under three minutes later, sliding home his twelfth of year past the helpless OKC puckstopper.

The Barons would find the equalizer before the period was out, as Eberle notched his league leading twenty-fourth of the season, putting home his own rebound, after being stoned by Hackett on his initial opportunity.

Heading into the final twenty minutes, the game was there for the taking but as has been the case in five of the two sides six previous meetings, the Aeors would find a way to get the job done.

Maguns Paajarvi's ill advised and frankly inexcusable drop pass near the OKC blueline, proved rather costly, as Zucker buried his second of the game, past a screened Danis, for the game winner.

The two points moved Houston past Oklahoma City into second spot in the South Division, one point back of the first place Charlotte Checkers. With the loss, Todd Nelson's crew fall to 17-11-1-3 on the year good enough for third place in the division, despite suffering from a lack of secondary scoring.

After playing on back-to-back night's to ring in the New Year, the Barons will have the next couple of days off to recover, before embarking on a three-game-in-three-night stretch. They will kickoff their hectic weekend in Grand Rapids on Friday night and follow that up with trips to Milwaukee and Chicago, to close out their four game road trip.
Posted by Oil Drop at 11:41:00 pm