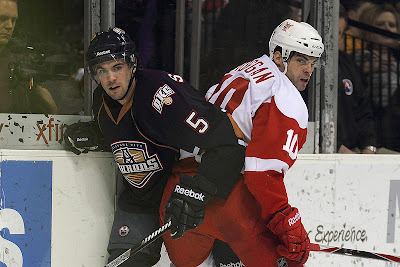 Powered by a five goal second period, the Grand Rapids Griffins had little trouble disposing of the Oklahoma City Barons on Friday night, beating Todd Nelson's squad by a score of 5-2. Riley Sheahan lead the way with a pair of goals and an assist, while Edmonton Oilers prospect Justin Schultz picked up his eighteenth of the season in the losing effort.

In what was arguably one of the worst opening frames of hockey one would want to watch, the Barons jumped out to an early lead, courtesy of Anton Lander's third of the season. In a period that featured a combined shot total of five, Oklahoma City were far from impressive..

Unfortunately, the Griffins found the mark early and often in period two. as Jeff Hoggan, Nathan Paetsch and Sheahan all put pucks behind Yann Danis, inside the opening five minutes. Turning what was a snooze fest, into an all out blow out.

Landon Ferraro would stretch the lead to three at the 11:48 mark, beating Danis on a breakaway, for a shorthanded marker. The Detroit Red Wings prospect was sent in all alone, courtesy of a lovely feed from Sheahan, after stripping Taylor Hall of the puck, along the side boards.

Sheahan would bring the second period onslaught to a close, tapping home his second of night and ninth on the season, and ultimately chasing Danis from the Barons net. While the veteran netminder did finish off the final two and a half minutes of the period, he would be replaced by Olivier Roy to start the third.

OKC would finally respond to the Griffins five goal run, with a late power play marker from defenceman Justin Schultz but it was nothing more than window dressing.

Jordan Eberle did manage to pick up another assist on the Barons third period tally, extending his current point streak to six straight games and becoming the first player to reach the fifty point plateau this season. The two-time reigning AHL Player of the Month, continues to lead the American Hockey League in scoring, four points clear of Schultz and his forty-six points.

The loss dropped OKC to 17-12-1-3 for the season, leaving them in fourth place in the South Division and seventh spot in the Western Conference.  After closing out 2012 on a four game winning streak, the Barons have opened up 2013 with back-to-back defeats but will look to right the ship in Milwaukee on Saturday night.

With Oklahoma City scheduled to play three games in three night's, one would expect to see Roy be given the starting nod in at least one of the next two outings. The only real question being, whether that start will come against the Admirals or Sunday afternoon in Chicago, when the Barons pay a visit to the Wolves.
Posted by Oil Drop at 3:03:00 am