Can you say predictable? 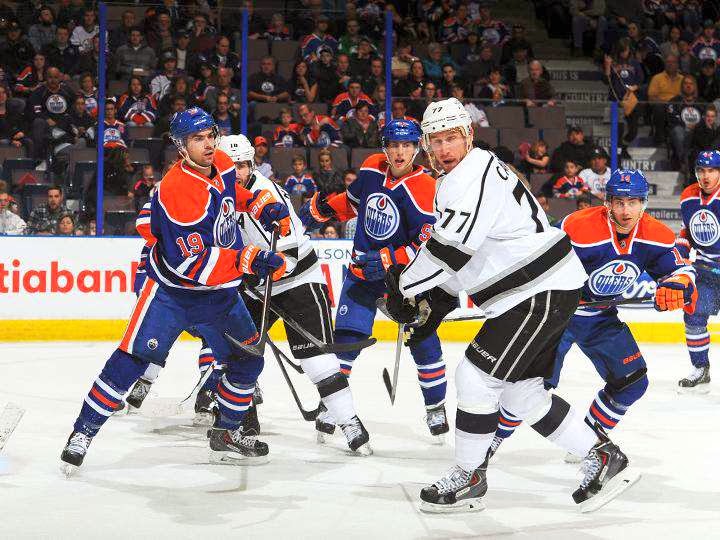 For some unknown reason, many Oilers fan seemed to be almost disappointed with last night’s predictable outcome against the Los Angeles Kings. Edmonton dropped a 4-2 decision to fall to 0-2-1 against their Pacific Division rival and have now been out shot 138-69 in their three games against a suddenly red-hot Kings side.

My question to all of you…why exactly are any of you shocked by what transpired at Rexall Place on Sunday evening? One team is thoroughly nestled in the basement of the Western Conference standings, while the other is headed in the complete opposite direction, having now won straight. What am I missing here? Quick. someone please tell me.

Ben Scrivens was busy yet again, facing 50 shots for the second time in his ten outings since arriving in town back in late January, but unlike some of his previous outings the twenty-seven year old had zero puck luck on this night. Early last week he benefited from some fortunate bounces against the Ottawa Senators and was lucky enough to turn that into a 3-2 win but he would have no such luck against his former teammates.

Jeff Carter scored twice without actually attempting a shot on goal, one coming courtesy of Philip Larsen’s skate and other glancing of the back of Carter’s leg before trickling over the line for his twenty-fourth of the season. As if two gift goal weren’t enough against the stingiest defensive side in the entire NHL, Alec Martinez would complete the hat-trick, as his seeing-eye point shot found its way through a maze of players before glancing off the Oilers staring goalie and into the back of the net.

While many will simply focus on the shot total, and for good reason, Scrivens wasn’t facing an all-out attack like he did against the San Jose Sharks during his record setting 59 save performance back on January 29th.  He was busy but the Kings had the puck for what seemed like the entire evening and were content with simply firing shots from literally anywhere on the ice.

Hard to argue with their strategy, especially considering the manner in which they scored three of their four goals. The thing is…this is now the third time this year that LA has basically toyed with Dallas Eakins crew. Again, why is anyone surprised?

Back on October 27th, Richard Bachman turned in what had been the performance of the season by an Oilers netminder, that is until Scrivens mastery of the Sharks, stopping 47 of the 48 pucks fired his way and single-handedly earning Edmonton a point in a 2-1 SO loss.

In their second visit to the Staples Centre, Eakins’ side was again heavily out shot, 40-24, and badly outplayed but Ilya Bryzgalov managed to keep his team in it until late in the third, when the Kings turned a one goal game into a 3-0 final.

So again, should any of us really be surprised to see Edmonton be out shot 50-27 in their own rink and manhandled by the big bad LA Kings? I know I certainly wasn’t and with the vast majority of the Oilers remaining home games coming against teams either fighting for a playoff spot or positioning within the post-season, expecting much of an improvement would be unrealistic.

Unfortunately, this team is what they are until the end of the season. They will generally have a handful of guys playing well on most nights, the trio of Sam Gagner, Taylor Hall and David Perron were those guys last night, but having either one line or a handful players going against teams like the Los Angeles Kings simply isn’t good enough.

It may suck to accept Oiler fan but the reality of the situation is what it is. In all honesty, you should probably be expecting things to only get uglier from here on out.
Posted by Oil Drop at 7:35:00 pm