Sorry but this is getting tough to watch 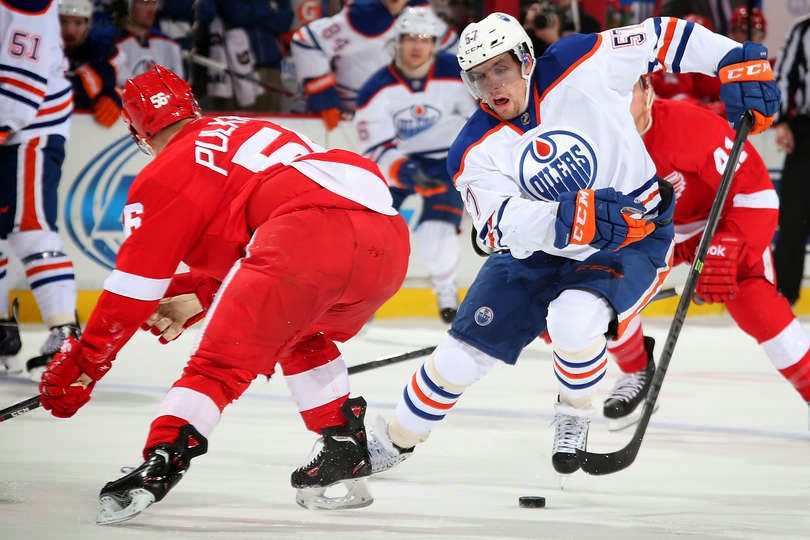 The Edmonton Oilers 2-1 shootout loss to the Detroit Red Wings marked the 45th time in 68 outings in which the team in Orange and Blue were on the wrong side of the scoreboard. With thirty-six of those defeats having come during regulation time, watching them fall for the ninth time via overtime or the shootout is viewed by some fans as almost being a positive.

While they may have been thoroughly pounded by the St. Louis Blues during a third period to forget on Thursday evening, taking two points from a Red Wings side that has been absolutely decimated by injury was a very real possibility. With the duo of Pavel Datsyuk and Henrik Zetterberg on the sidelines, Detroit is nowhere near the team they are when healthy.

With that being the case, one would have thought the Oilers would try and take the game to Mike Babcock’s undermanned crew but instead, we continue to watch Dallas Eakins try and coach this group into some sort of defensive juggernaut. Why you ask? Good question, especially when you consider this team had originally been built to create offence and push the pace on a nightly basis.

Outside of Ryan Smyth being handed a gift courtesy of Red Wings blueliner Brendan Smith, Edmonton created absolutely zero offence on the night. While Taylor Hall and David Perron were the only two forwards to pressure Detroit’s defence, neither had anything close to a Grade “A” scoring chance on netminder Jimmy Howard.

Unfortunately, that has become the norm on far too many nights. If Hall and Perron aren’t going, this team is dead in the water. The second line of Jordan Eberle, Ryan Nugent-Hopkins and Nail Yakupov continue to be complete non-factors, unless of course they are fishing the puck out of their net after being pinned in their own end for what sometimes feels like an eternity.

To be completely honest, this isn’t even a one line team. At the moment, this is a team that has two players going upfront and a bunch of guys the head coach is trying to turn into defensively responsible players. While these players need to improve on that side of their game, asking highly-skilled talent to turn themselves into something they are not, is the dumbest thing this organization could do.

If that was the plan all along, than why bother drafting them?

With all due respect to a guy like Matt Hendricks, as good as he has been and as hard as he works, I don’t want a guy like that anywhere near the Oilers top two lines. As of right now, one could easily argue the trio of Hendricks, Boyd Gordon and whomever Eakins throws out on the other wing is currently his second line.

I am sorry but I am not ok with that. I have no appetite to relive the late 1990’s-early 2000’s of Oilers history. Those teams were never good enough to challenge for anything. They worked real hard but were nothing more than a bubble playoff team that had little to no chance of advancing past the firs round of the playoffs.

Now don’t get me wrong, I am all for teaching these kids how to play that so-called “200 foot game” but let’s use some common sense here. The fact this group was unable to dictate terms, at any point, against what is quite easily the worst Red Wings lineup I have seen in over two decades, is simply mortifying.

Is the master plan to turn this group into a slightly more offensively productive version of the Nashville Predators? I sure hope not because those are not the players that are currently on this roster. If that is the sort of team Craig MacTavish and Dallas Eakins are trying to put together, there had better be more than just one or two “bold moves” coming.

Either work with these players and allow them to continue to develop both sides of their games or move them for pieces that better suit the type of player you envision wanting on this club. The more I watch the Eberle-RNH-Yakupov trio, the more discouraged I am becoming.

Winning games is all well and good but as per usual, come next October these points mean nothing. Outside of the game against the Ottawa Senators and the odd stretch of play here and there, this team has been about a dull as dull can be since resuming play after the Olympic break.

Believe me, I get it. The vast majority of vans are tired with this club’s current predicament and they should be. While this roster has more than a few holes that need plugging, especially on the backend, many of the core pieces needed to turn a rebuilding team into a successful one are already in place...and yet it is starting to no longer feel that way.

People always go on about the Edmonton Oilers having no true identity but the fact of the matter is, they most certainly do have an identity...it’s just not one the current head coach or general manager appear overly comfortable with.
Posted by Oil Drop at 10:36:00 am