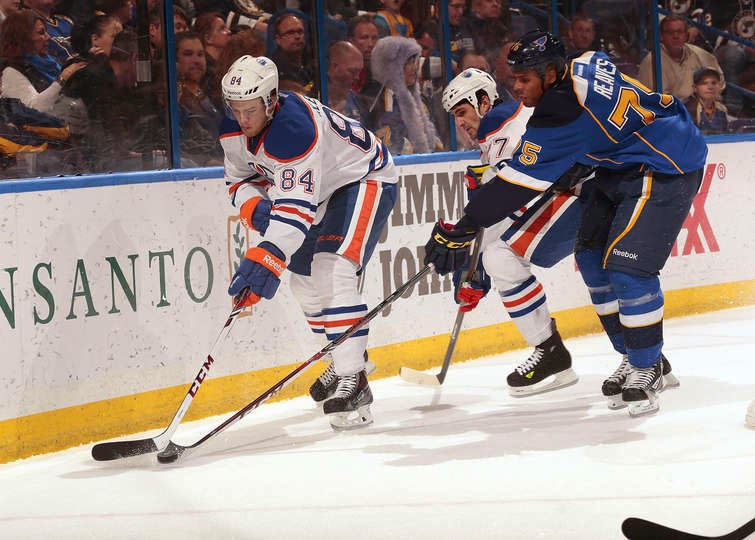 Defenceman Oscar Klefbom had been waiting to make his NHL debut ever since being selected by the Edmonton Oilers in the first round of the 2011 Entry Draft. That dream finally came to fruition earlier this week and the talented Swede seems poised to make the most out of the opportunity.


Klefbom may be just three games into his National Hockey League career but the twenty year old has managed to hold his own along the Oilers blueline. While head coach Dallas Eakins used the rookie rearguard for just over eleven minutes in Friday night’s 2-1 loss to the Detroit Red Wings, it had little to do with the youngsters on ice performance.

Playing three games in four nights is tough at the best of times but doing so on the road and during your first week in the league, could not have been easy on the former 19th overall pick. To his credit, the Oilers bench boss did both the admirable and proper thing by protecting the kid from what had to have been a grueling past few days.

After looking somewhat overwhelmed during his first few shifts against the Minnesota Wild in his first NHL game, the 6’ 3” blueliner hasn’t looked the least bit out of place. In just nine periods worth of action, Klefbom has already displayed the ability to move the puck off his stick quicker than every one of his fellow defencemen, with the possible exception of Justin Schultz.

While not an overly physical player, the kid has been able to use both his size and reach to his advantage in the defensive zone. When he has had the puck on his stick, Klefbom has generally made the right decision with it and outside of the aforementioned handful of hiccups against the Wild, #84 has looked pretty darn good.

There is no question Klefbom has benefited greatly from having veteran Andrew Ference by his side and the Oilers captain has done a superb job of making things as simple as possible for the youngster. Clearly, Ference has made it a priority to keep the highly regarded prospect engaged and always thinking, as he has continually been seen talking to his D partner both on the ice and on the bench.

Eakins made the point of using Klefbom almost exclusively at even strength on Tuesday in Minnesota but has made a point of giving him time on both the penalty kill and man advantage in each of the last two games. The fact this coach already feels comfortable enough to use him on special teams says quite a bit, as Eakins isn’t exactly one to handout ice time to inexperienced players.

We really have no idea if the plan was to have Oscar Klefbom dress for Edmonton’s final seventeen games but the talented blueliner’s play may actually dictate they do just that. Be it in the National Hockey League, the American Hockey League or a combination of the two, these next few weeks will likely play a rather large role in where the organization sees him fitting in come 2014-15.

If his first few games are any indication of what we can expect, the smart bet would be on him starting next season as a regular member of the Edmonton Oilers blueline. Let’s just hope Craig MacTavish can find a way to insulate his kids on the backend, instead of counting on them to play major roles prior to being anywhere near ready for the workload.
Posted by Oil Drop at 7:43:00 pm